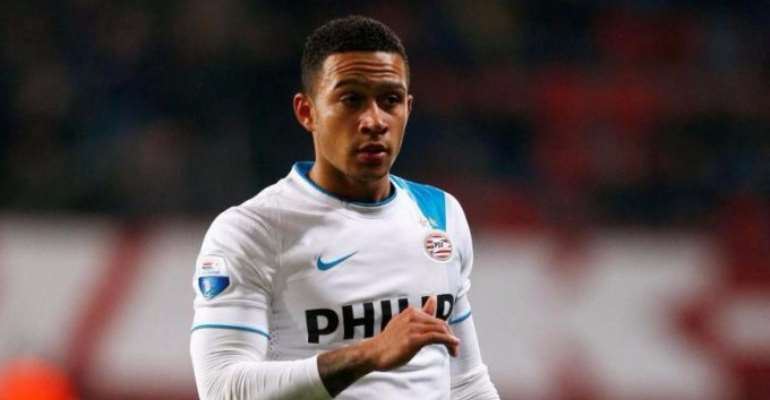 The rumour mill has linked PSV's Memphis Depay with a move to Manchester United, but Louis van Gaal was coy on his reported interest in him.

Louis van Gaal refused to be drawn on speculation that Manchester United are interested in signing PSV forward Memphis Depay.

Depay has been in scintillating form this season, scoring 20 goals in league 27 appearances as PSV have stormed to the Eredivisie title.

That form has led to media rumours that Depay could be reunited with Van Gaal, who coached him during his time as Netherlands boss, with PSV technical director Marcel Brands stoking the fires earlier this week by claiming United were one of two teams interested in a deal.

United manager Van Gaal says that preparations for next term are underway, but was coy when asked about the possibility of bringing Depay to Old Trafford.

"I don't discuss it with the media, you know my answer," he said ahead of Sunday's trip to Everton. "I have a lot of relationships with players so I cannot buy all the players I have coached already.

"We are busy with next season, I've said that already in previous press conferences. It's usual business at the club."

Van Gaal was also asked about the possibility of Robin van Persie returning to the starting XI after he was named on the bench in last weekend's defeat to Chelsea after two months on the sidelines with a knee injury.

The striker also played over an hour in an Under-21s fixture against Leicester City on Monday to step up his recovery.

"He has to train very hard, play in the second team," the Dutchman added.

"He has to show his qualities again. Then I have to compare him with the positions he can play, with the players that play in that position - it is always the same."