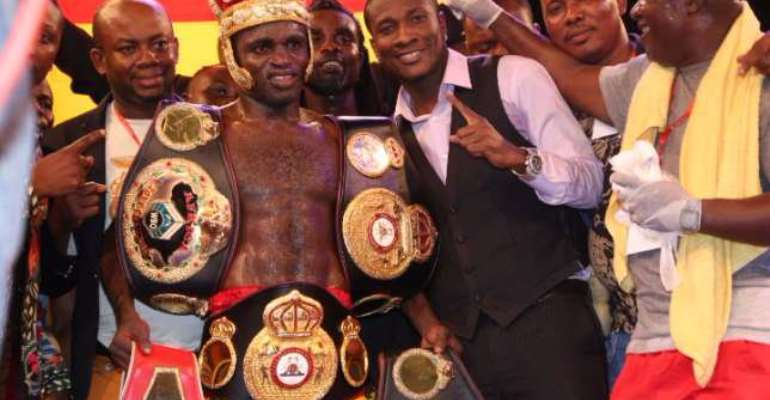 Emmanuel 'Game Boy' Tagoe lived up to his word by totally outclassing his Filipino foe, Joebert Delos Reyes at the Accra Sports Stadium on Friday night to continue his march towards the much craved world title dream.

Tagoe was at his pugilistic best, flooring Reyes four times on the way to a fourth round stoppage of Reyes in front of his boss, Asamoah Gyan.

The BabyJet Promotions event was codenamed 'Legendary Fists' in the Ghanaian capital.

Tagoe showed his intents in the very first round, opening with a dominant flurry of punches, jabs and uppercuts so much the 25 year old Reyes could find no answers to resulting in a knockdown in the opening round.

The Filipino managed to beat the referee's count to finish the round and even handle the incessant pressure from the Ghanaian in rounds two and three.

However the fourth round will prove the undoing of Reyes following a dominant performance by Tagoe who sent his opponent to the canvas three times, that the referee had no choice than to stop the bout with just a quarter of the 12 scheduled rounds gone.

Tagoe who has vowed to realise the childhood dream of world championship glory, was full of praise for his BabyJet promotions team after he was decorated with the WBA title.

"I am very grateful to my team for all their support, my boss Asamoah Gyan has also done well always calling me to find out how I'm doing and giving em everything," tagoe said at ringside.

"I also thank Joshua Clottey for taking his time to come to my training to advice me and all otehr former champiosn including Ike Quartey for tehir continued advices," Game Boy added.

He concluded: "I have the talent, God blessed me with this talent and am working hard and surely with the support of my team and everyone else I am going to bring the world title."