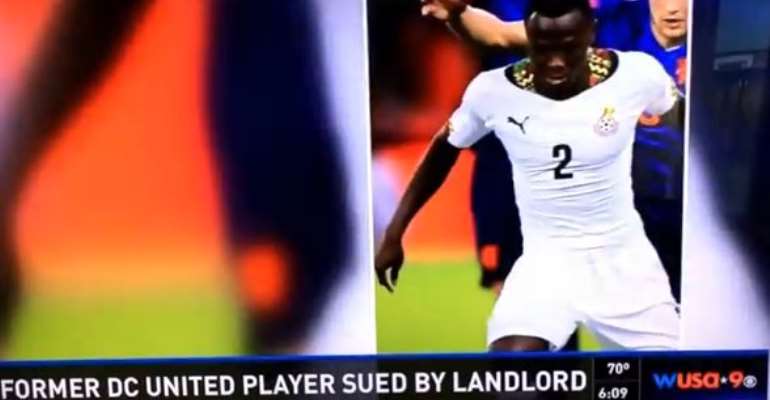 The story behind what has led to a lawsuit in an Arlington court suit over rent between Ghana star Samuel Inkoom and his ex landlord Paul Curtis Willete has emerged.

The Washington Post first reported the story last week about how Inkoom,then a player of MLS side DC United rented Mr.Willete’s property,destroyed it and left without notice while still owing rent.

In a news report filed by WUSA9, Mr.Willette says the almost inhabitable property was his dream home and described how it came to be in such a bad state after the Inkoom’s had left.

“What we believe happened is that a T.V. was mounted here and it punctured a sewage line.It’s basically collecting everything that is coming down. So over the course of a week or two weeks or three weeks, what happened is this eventually backed up to a point where it began to overflow. Waste water, sewage water, which is pretty bad,” said Willette. The water soaked into carpets, walls and ceilings.

Willete further revealed that he initially turned down the first offer from Inkoom and his wife Omega because their financial records showed they could not afford the $2,000 a month rent at the time and only agreed after DC Unied sent a letter indicating they would be paying the right back a housing stipend.

“He saw the house, fell in love with it, naturally, and wanted to move in. Unfortunately, looking at their financial situation, we weren’t going to be able to approve them.”

“We changed our minds immediately. We said we’ve got this letter from the team, it is legit, we would love to help out a player who is coming to the U.S. for the first time and playing for one of our sports teams here in the area. We didn’t hesitate after we got that letter,” remembered Willette.

“Unfortunately it was a very bad decision.”

Willette came home from Afghanistan early, but decided to honor the lease with Inkoom and his family.

“I had a lease with the gentleman and his family, he has three little kids, he had another on the way, and I wasn’t about to uproot them and displace them out of the home. So I found another place to live.”

But the rent checks stopped coming: Inkoom had been traded.

“He said, I’m no longer getting the money from the team,” remembered Willette. “I said look, I know it’s difficult but I can give you a couple of extra weeks.”

When Willette was not able to get in touch with him after the grace period, he decided to make an in person visit. The place was abandoned.

“So he had money to buy his big expensive T.V. but he doesn’t have money to pay his rent?” Willette said.

The damage was everywhere, and Willette was devastated. Inkoom didn’t have renter’s insurance.

“It’s disgusting in the sense of a health issue, but it’s also disgusting in the sense that someone would do this to a property, not tell their homeowner, especially someone who has gone out of their way to provide an open hand for you to welcome you to the U.S. And then they don’t even tell you that the issue occurred, and they try to cover it up and abandon the property.”

So, Willette tried D.C. United. After all, they were the reason he decided to rent to Inkoom in the first place.

“I said, don’t you feel like you have a moral obligation to help someone out who has helped you? He didn’t seem to care,” said Willette.

Watch video
In a statement to WUSA9, D.C. United said, “This is an unfortunate situation. We have helped put Mr. Willette in touch with Samuel Inkoom and his agent, and we are hopeful that the matter can be resolved.”