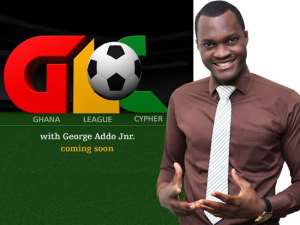 Episode two of the exciting Ghana League Cypher will be made available for downloads on Monday, 27th April 2015.

The 2-in-1 package will cover the diagnosis and prognosis of Week 14 and Week 15 games respectively of the Ghana Premier League.

Review of Week 14 games over the weekend will be given an in-depth analysis, not overlooking the Week’s top-liner featuring Hearts of Oak and Great Olympics - certainly one set for the gods - in the Greater Accra Regional (Mantse) Derby.

Preview of midweek games slated for Wednesday, 29th April 2015 would also be featured prominently on our cards as the first half of the league is rounded up in Week 15.

Superbly anchored by George Addo Jnr, resource personnel including coaches and seasoned journalists will grace the podium as they digest the local league with unrivaled authority.

Furthermore, a section of the show’s new outlook will be dedicated to the Ghana League Stats to give viewers a proper icing on the cake.

The stats, thus would be made available to viewers first before it flies on any other portal in the subsequent days.

Episode two 2 of the action-packed Ghana League Cypher, which promises to be even more enthralling and captivating, will be made available on key websites such as Myjoyonline.com, Ghanasoccernet.com, Footy Ghana.com, Ghana News Agency and a host of others committed to the cause of promoting the local league.

Video podcasts will also be made available on Faceook, Twitter, Youtube and other social media networking sites.