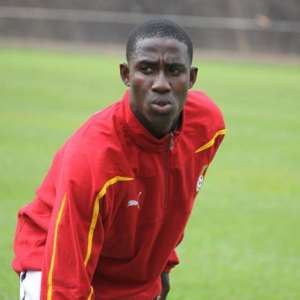 Heart of Lions and Ghana U-17 midfielder Isaac Twum is on the radar of Norwegian top league side FK Haugesund, Allsports can exclusively reveal.

The Norwegian side are believed to have made their interest official by formally inviting the Ghana U-17 captain to Norway.

Twum has been in great form in the Ghana Premier League helping Heart of Lions to third in the current standings.

His form hasn't gone unnoticed as he was named in Maxwell Konadu's local Black Stars squad.

'Yes I can confirm we've been contacted by FK Haugesund about Isaac and he's also attracting interest from other clubs in Europe,' Agyemang told Allsports.com.gh.

'We're still talking but nothing is concrete yet. The picture will be clearer when we arrive in Norway next month.'

Recently named in Allsports Top 5 Ghanaian talents under 20, Twum is the youngest player in the current local Black Stars squad.