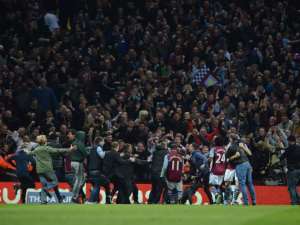 The Football Association has charged Aston Villa and Reading in relation to crowd disturbances at recent FA Cups ties involving the clubs.

It is alleged both clubs failed to prevent spectators encroaching onto the pitch following their sixth-round matches last month.

Villa's 2-0 victory over Midlands rivals West Brom on March 7, had to be temporarily stopped as supporters spilled onto the pitch towards the end of the game.

The full-time whistle prompted another pitch invasion as jubilant fans celebrated their club setting up an FA Cup semi-final against Liverpool, where they triumphed 2-1 to book a Wembley return against Arsenal on May 30.

Seats were also thrown from the stand holding West Brom's supporters and some Baggies players were confronted by celebrating fans.

After the match, West Brom expressed their "deep concern" for the safety of the players an manager Tony Pulis described the scenes as "disgraceful".

Reading were also charged after fans invaded the pitch following their 3-0 replay victory over Bradford at the Madejski Stadium on March 16.

That victory earned the Royals a semi-final tie against Arsenal, which they lost 2-1 after extra time last Saturday.

Both clubs have until April 23 to respond to the charges.