I Will Stop Tagoe …Filipino Opponent Brags On Arrival 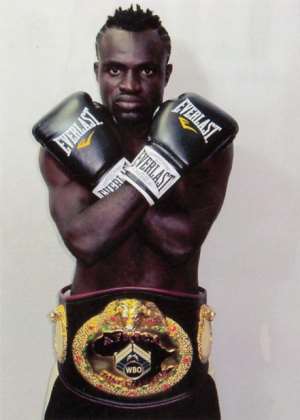 Emmanuel Tagoe's opponent Joebert Delos Reyes has declared on arrival that he will stop the Ghanaian in their forthcoming vacant World Boxing Association title fight.

The 26-year-old boxer told the press at the Kotoka International Airport yesterday that his host would not travel the full distance when they clash this Friday at the Tennis Court of the Accra Stadium.

'I am ready for him, I mean your boxer. I will knock him out,' he bragged with little difficulty with the Queen's language.

And responding to why he was so sure of victory, he said, 'I have been training for three months for this fight. I have watched him, he is fast but I will knock him out.'

Reyes, 22-3-19-15KOs, who is pitching camp at the Best Western Premier Hotel, arrived a few minutes to 2pm in the company of his trainer, Ericson Santig and other technical men.

Michael Dodoo will take on Benjamin Lamptey in a vacant national lightweight championship in the other fight, while Isaac Aryee faces Togolese Nicholas Sarouna in their international Welterweight context.

Patrick Aryee and Isaac Dowuona will clash in a national featherweight eliminator with strong man Obodai Sai and Kofi Many sorting themselves out in a Light Middleweight contest.

Prince Octopus Dzanie will cross swords with Oblitey Commey in a Bantamweight contest, while Dodzie Kemah will fight a yet-to-be named opponent in a Welterweight contest.

The event will be telecast live on the Super Sport 9 channel.