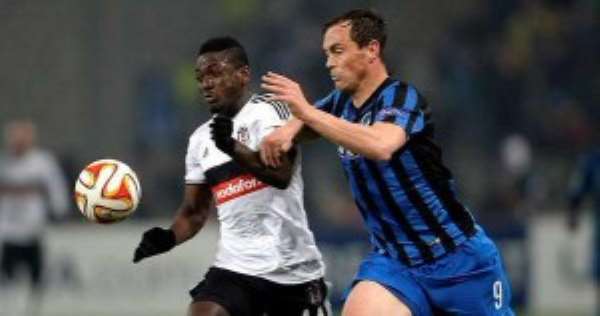 Ghana defender Daniel Opare has returned to full fitness after Turkish giants Besiktas named the right-back in their squad in their top-flight match over the weekend.

The 24-year-old was on the bench as they hammered Kasimpasa 5-1 in their Super Lig match on Saturday indicating that he has regained full fitness.

The multi-talented player's return is also a boost for Ghana ahead of the start of the 2017 Africa Cup of Nations qualifiers in June.

Opare has been on the sidelines since suffering a hamstring injury while playing for the side three weeks ago.

He hit the road to full recovery from the hamstring injury as he has begun light training two weeks ago and now he is fully fit.

The former Real Madrid starlet, 24, had been out for a couple of days with a 'minor' hamstring injury and was ruled out for Besiktas' Super Lig clash with giants Fenerbache three weeks ago.

Besiktas manager Abdullah Avci is greatly delighted with the Ghanaian's return as he has been influential for the club since arriving from Portuguese side FC Porto.

Opare is currently training under the supervision of a medical specialist who is tasked to ensure his return to action is smooth.