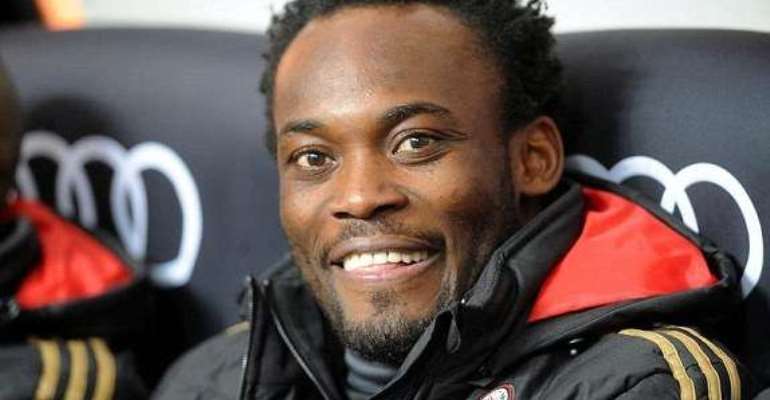 Emmanuel Agyemang-Badu made a 74 minute appearance in the Italian Serie A on Sunday as his Udinese side played Chievo Verona away from home.

The game between the two sides ended in a 1-1 draw with Sergio Pellisier and Bostjan Cesar scoring the goal for Chievo Verona and Udinese respectively.

Richmond Boakye Yiadom was not in the match-day squad for his Atalanta side when they drew away from home to Roma.

Michael Essien did not make the squad for AC Milan for the Milan derby against city rivals Inter.

Ghanaian player Sulley Muntari did not also play a part for AC Milan as he has asked the Italian club not to use him again until the end of the season where he is expected to leave.

Derek Boateng did not feature for his Spanish La Liga side Eibar when they entertained Celta Vigo on Sunday.

Kevin-Prince Boateng did not travel with his Schalke 04 side in their German Bundesliga game against Wolfsburg.

Schalke played out a 1-1 draw with Wolfburg.
Franck Acheampong played the full game for Anderlecht in their Europe qualification play-off game in Belgium.

Anderlecht lost to match day opposition Club Brugge away from home by two goals to one.

In the Turkish league, John Boye played the full game for his Kayseri Erciyesspor side in their 1-0 home defeat to Eskisehirspor. Sezgin Coskun scored the goal for Eskisehirspor on the stroke of half time.

Abdul Majeed Waris however could not make it off the bench for his Trabzonspor side in Turkey.

The Ghanaian watched on from the bench as his home side beatGalatasaray by two goals to one.

In the Denmark league, Ghanaian player Daniel Amartey played the full game for FC Koebenhavn as they won 2-0 at home to FC Nordsjaelland.

Another Ghanaian player Danny Amankwaa made a 14 minute appearance for FC Koebenhavn in the game.

Amartey received a yellow card booking in the 74 minute of the game. Follow @kboakye92