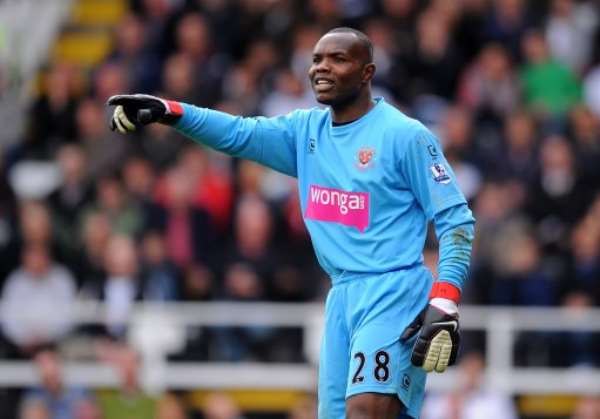 Former Ghana international Abubakar Damba has joined a growing list of Ghanaians who are championing a campaign to recall Richard Olele Kingson into the Black Stars.

Olele, 36 , has rolled back the years since his return to First Capital Plus Premier League.

The former Blackpool goalkeeper has kept three clean sheets this season and more impressively has been hugely dominant in Great Olympics surge up the league table.

The Black Stars have struggled since the veteran goalkeepers departures with Adam Kwarasey, Fatau Dauda and now Razak Braimah all failing to live up to the task.

'I think it is a good call because we have been unable to replace him,' Damba told Citi FM

'You have to look at the way the Black Stars is playing and tell if he is relevant and can contribute and my call is yes.'

'He will also still give on the experience he has on the younger once.'

Damba's call adds up to former international Godwin Attram's claims that Olele still had all it took to still compete at the highest level.