Who will win? Real Madrid vs. Atletico, the pick of the UCL quarterfinals 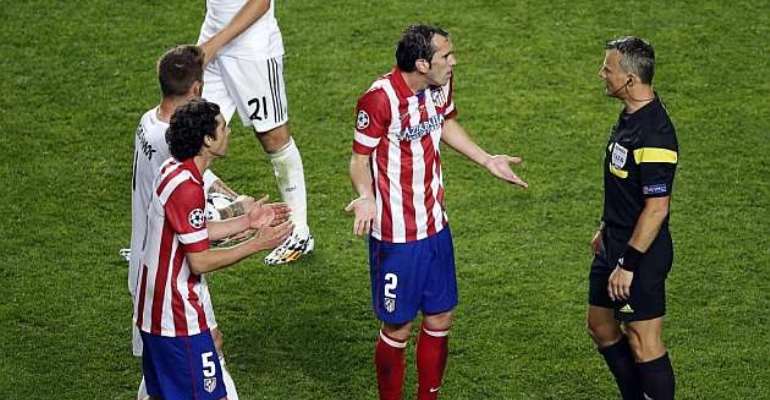 The Champions League has offered one truly big matchup, though the big sides were ultimately kept apart in this season's quarterfinal draw. Bayern Munich, Barcelona and Real Madrid have occupied 12 of the last 20 semifinal places, and the likelihood is that it will be at least 14 out of 24 given the draws the Catalans and the Germans were afforded.

That feeling sums up a sense of repetition about this draw, given that it involves one match played in the group stage (let alone the 2012-13 quarterfinals) as well as a replay of two old finals. The most recent of those, the 2014 Madrid derby, is at least set to be the most engaging tie of the round.

Paris Saint-Germain vs. Barcelona
Two questions should decide a meeting between sides who have already met twice this season. Can Barcelona maintain their magnificent current performance level just when it matters, given that there have been a few dips in this campaign? Can PSG exploit any drop, and themselves fully build on what Laurent Blanc claimed was a transformative win over Chelsea in the last 16?

Who will win?
The French champions have already been checked back once from such notions this season, having beaten Barcelona in their first group game only to be denied top spot by the manner in which the Catalans eventually pulled them apart in the second. The mood in the PSG squad is said to be buoyant following the win over Chelsea, although that may be affected by the loss of Zlatan Ibrahimovic and Marco Verratti for the first leg. Then there's the sparkling form of Leo Messi. He should be the difference, as he so often is.

Prediction: Barcelona
Atletico Madrid v Real Madrid
This is the pairing that will focus all attention, and demand the most attention from those involved. It also feels like a particularly delicately poised tie; not just because the two teams are so close in geography and quality, but also because they've had so many meetings in such a short space of time -- not least in last season's final. It is precisely why, rather than the usual cliched intangibles of a local derby, form might go out the window.

For one, there's the fact that both will be driven by a desire for revenge. Real Madrid will want to make up for their 4-0 destruction at the feet of Atletico in January, a game that so emphasised how Diego Simeone has the measure of the notionally bigger neighbours. At the same time, his power ultimately failed to apply in last season's showpiece (Real levelled it late and went on to win 4-1 after extra time), so it presents something of a double-edged challenge.

Who will win?
Atletico have the perfect opportunity to quickly banish the memories and meaning of that match in Lisbon, in which they apparently succumbed to so much of their history by conceding that stoppage-time equaliser. Yet what would it say about them if they were again to capitulate to their bigger neighbours on the biggest stage? Is it really possible for one team to continue such a fine run in a fixture that involves two teams so evenly matched? Can Real really remain so fragile for so long, given their poor recent form?

Either way, it sets up a sensational tie.
Prediction: Atletico
FC Porto vs. Bayern Munich
Probably the easiest tie to call, even if that does not necessarily mean it will be an easy tie for Bayern to win. Porto are an intelligently set-up team, awkward in defence and abrasive in attack. They are capable of surprising a Bayern team who have occasionally been lax, and it would be very dangerous for Pep Guardiola's team to put in a performance against Porto like they did in the first leg against Shakhtar Donetsk.

Who will win?
It is precisely that laxness that should mean Bayern go through, though. Guardiola has been at pains to fight it, and there was the semblance of the type of response and rage he would expect in the 7-0 second leg win over Shakhtar. Unlike the other three ties, this pairing boils down to a harsh reality: if the superior team plays to anywhere close to their potential, they should sail through.

Prediction: Bayern Munich
Monaco v Juventus
This duo can feel somewhat fortunate, since they've both managed to miss one of the four favourites of Bayern Munich, Barcelona, Real Madrid and Atletico. Therefore, this tie represents a fine opportunity for both of these clubs to get back to a level they've been aiming at for so long. Monaco have not reached the semifinals since 2004, Juventus since 2003. Their one big previous meeting came in the final-four stage in 1997-98. All of that does mean that this is one of the most novel ties and, as such, rather difficult to call.

Who will win?
On the one side, there is a Monaco team who have such a solid defence but suddenly looked worryingly panicked once the pressure was applied in the second leg against Arsenal. On the other side, there is a supremely technical Juventus outfit, but one hampered by the seven-week injury to Paul Pogba. It would be cruel if the injury to the Italian champions' key player caused him to miss the surge in this competition they've been waiting half a decade for, or caused them to buckle altogether. That, however, is knockout football.

This is perhaps the only tie that illustrates the old novelty of knockout football. It is certainly a golden chance for both.