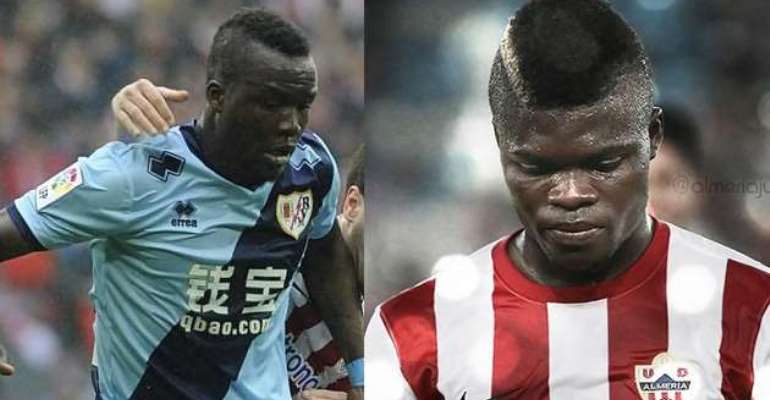 Two Ghanaian stars will play against the two biggest clubs in Spain on Wednesday night.

Mohammed Fatau will feature for Rayo Vallecano as they come up against Real Madrid whiles Thomas Teye Partey will join his Almeria's side trip to the dreaded Camp Nou stadium against league leaders Barcelona.

For Fatau's Rayo, they will face a Real Madrid side that destroyed Granada at the Santiago Bernabeu by nine goals to one on Sunday.

Rayo's recent record against their Madrid neighbours has been abysmal, with Real winning the past 13 La Liga contests between the two teams - including a 5-1 drubbing in the reverse fixture in November.

But Fatau and his teammates are in form having won four of their past five Liga matches and Alberto Bueno has been at the forefront of their run with eight goals in his last five outings.

Fatau recently returned from injury and played part in his side's 2-1 win at Eibar.

The 19-year-old midfielder was missing in action last week as they lost 4-1 at home to Levante.

Having played 22 games so far this term, Teye Partey will lead his team to redeem themselves against the Primera Division league leaders.

AlmerÃ­a have not won in their last seven league games and their most recent defeat against Levante at the weekend saw the club part company with coach Juan Ignacio MartÃ­nez.