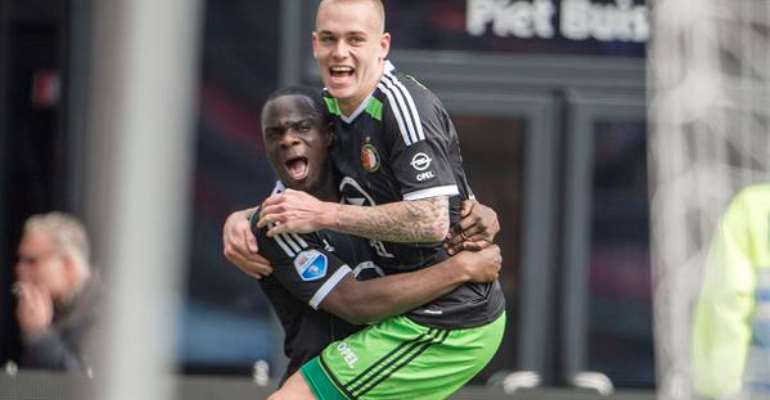 Ghanaian attacker Elvis Manu took his scoring boots and bagged a double for Feyenoord in their emphatic 4-0 thrashing of AZ Alkmaar in the Dutch Eredivisie on Sunday afternoon.

The 21-year-old attacker scored his fifth league goal of the season just before the break and added his second on the afternoon in the 59th minute at the AFAS Stadion to increase his season tally to 11 in all competitions.

AZ were seeking to upset their guest but Dutch-born Ghanaian youth defender Derrick Luckassen scored an own-goal to gift the lead to Feyenoord before Elvis Manu assisted Anass Achahbar to double the advantage on the 40th minute mark.

After assisting Achahbar Manu ensured he got his own name on the score-sheet before the end of the first-halve.

He collectively flicked a head past Esteban Alvarado on the 45th minute to send Feyenoord 3-0 up before finishing off a rebound effort from inside of the box 14 minutes into the second half.

The double has put his league tally to six goals in 22 games this season for Feyenoord.