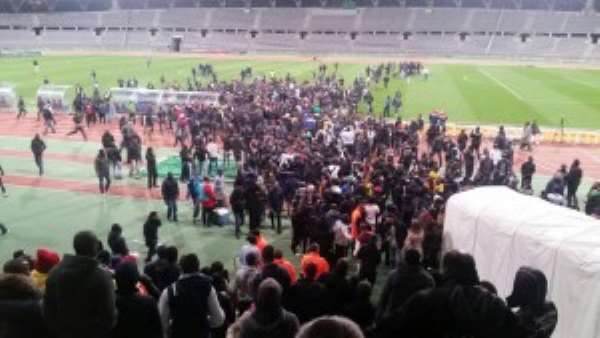 Selfie-seeking pitch invaders marred the beauty of Ghana's 1-1 draw friendly draw against Mali as they stormed the field in huge numbers at the end of the game in Paris.

Supporters promptly outnumbered security officials at the Stade Charlety when the referee ended the match between the two sides with many seeking selfies with the players.

The numbers proved overly difficult for the players of both sides to move as they outnumbered the security officials that left the players vulnerable to attacks.

The invasion left a sour taste in the mouth as the game was beautifully played out before an impressive and passionate Ghanaian and Mali fans.

Pitch invaders were seeking selfies with the players

Bakary Sako converted a 71st-minute penalty to earn Mali a 1-1 draw with fellow west Africans Ghana in a friendly on Tuesday.

The striker, who plays for Wolverhampton Wanderers in the English second tier, equalised after Ghana's Richmond Yiadom Boakye had needlessly tugged down Molly Wague at the Stade Charlety in the suburbs of Paris.

Ghana opened the scoring when Emmanuel Agyemang Badu got to Yiadom Boakye's pass just ahead of Mali goalkeeper Souleymane Diakite and took the ball past him to tap into an empty net in the 53rd minute.

Yiadom Boakye almost grabbed a winner but struck the upright 10 minutes from time.

It was a second game in four days for Avram Grant's Ghana, who lost 2-1 to Senegal in Le Havre on Saturday.

Mali were playing their second game since appointing Alain Giresse as coach, having lost 4-3 to Gabon in Beauvais last Wednesday.