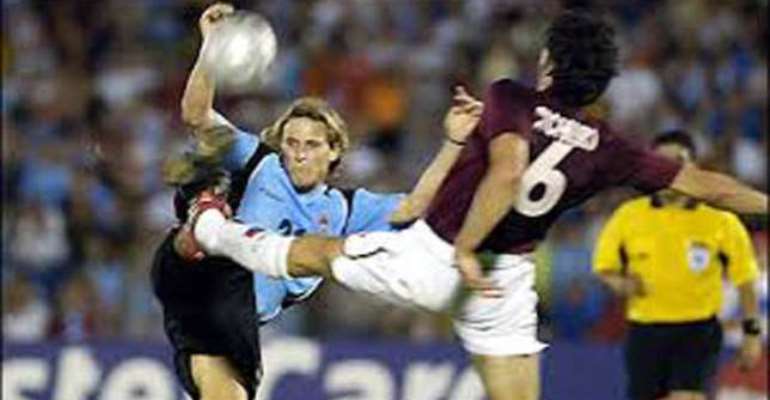 Going into their qualification campaign, Uruguay manager Juan Ramon Carrasco had reworked the side's rigid defensive style into an open and attacking flow, resulting in wins over Bolivia (5-0) and Chile (2-1), as well as an explosive 3-3 draw with Brazil (though they also suffered a crushing 4-1 loss at Paraguay). Venezuela, meanwhile, had opened with losses to Ecuador (2-0) and Argentina (0-3) before rallying with narrow wins over Colombia (0-1) and Bolivia (2-1).

Playing before a crowd of 40,094 at the Estadio Centenario in Montevideo, the hosts attacked from the opening whistle, applying furious pressure on the Venezuelan goal. But it was the visitors who took the lead in the 19th minute with a long-range blast from midfielder Gabriel Urdaneta. Uruguay renewed their energy on offense and were twice denied by the woodwork in the first half.

Venezuela doubled their lead in the 67th minute with a goal from HÃ©ctor "El Turbo" Gonzalez on a counter. Ten minutes later, Gonzalez delivered a cutting pass that fellow midfielder Juan Arango easily stabbed home for the final 0-3 margin. Venezuelan supporters dubbed the match "the Centenariazo," after Uruguay's famous "Marazanazo" victory over Brazil in 1950. Uruguay manager Carrasco, meanwhile, called the match "a stain on the history of Uruguayan football."

Ultimately, neither team qualified for the 2006 World Cup, as Venezuela's form faded and they finished 9th out the 10 CONMEBOL teams. Uruguay finished 5th and advanced to the CONMEBOL/OFC playoff where they lost to Australia on penalties.