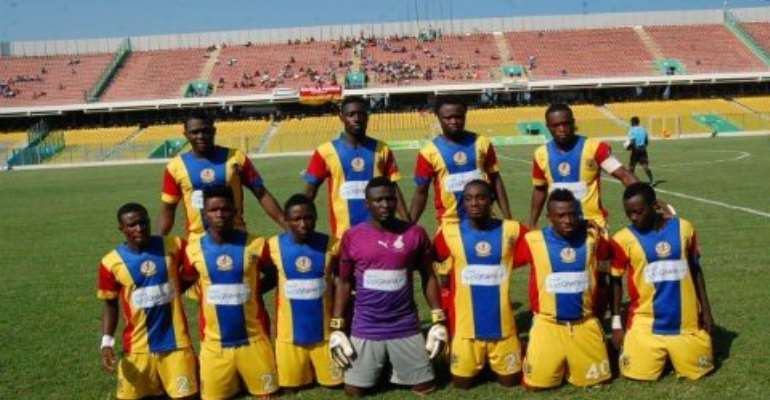 A board member of Hearts of Oak confirms to Joy Sports that the club has signed a two year sponsorship package with sports wear manufacturer, Eureka.

Joy Sports can report that the deal demands Hearts of Oak to sell 10,000 replica jerseys to their fans while Eureka kit the club for the duration agreed.

Although the source admits the deal was brokered by a company called EA Sports, as reported in the local media, he denies that marketing consulting agency has any link to the famous video game manufacturer that produces the Fifa soccer franchise.

"We are happy about this move and think it is a step in the right direction to the club," the source said Thursday on condition of anonymity because the deal has not been made public.

"The corporate governance system we are trying to put in place ahead of the traditional way of doing things will not be easy, but over time all our stakeholders will understand that progress is good," he went on.

Joy Sports can report that there is no monetary compensation for the Phobians.

Relief and reprieve
The last time Hearts had a kit manufacturer was in the 2008-2009 season when German sportswear maker Jako was their partner. That deal was not renewed because the Mulfingen-based company felt it was not getting mileage.

Checks by Joy Sports indicate that since then, the club has had to buy jerseys from the open market and emblazon them with the logo of the prevailing shirt sponsor.

"For a club of our age and stature, this has not been the best practice so we can look at this Eureka deal as a good thing," the source went on.

Hearts are currently reeling financially due to the spiralling cedi, as well as lack of patronage of games by fans.

In the year-ending financial year last November, Hearts announced a record 73% drop in revenue for the 2013/14 football season.

Causes of cash problems
This drop in revenue is largely due to lack of transfer market activity as well as the inability to attract sponsorship during the year under review.

Hearts of Oak currently has about 70 people on its payroll, also incurred GHS 2,071,548 in general and administrative expenses for the 2013/14 financial year.