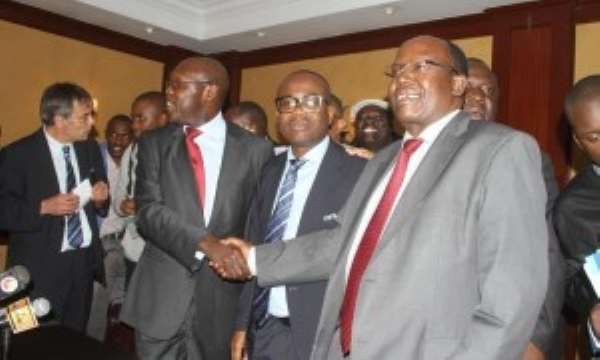 Ghana FA president Kwesi Nyantakyi has been hailed as the new 'Kofi Annan' as he has successfully ended the protracted football crisis in Kenya after leading a FIFA delegation that mediated talks between two fighting parties as their feud threatened to cripple the game in the country.

Top football clubs and the league was thrown into a state of confusion and legal battles after two groups proposed rival premier leagues with conflicting competitions which forced FIFA to send the delegation led by the Ghanaian to end the impasse.

The Nyantakyi-led three-man FIFA delegation resolved to have a 16-team Football Kenya Federation (FKF) Premier League run by the Kenyan Premier League Limited (KPL) as they both agreed to the deal proposed by the affable Ghana FA president.

Following the marathon talks  in Nairobi, between the Fifa delegation, the federation and KPL, Nyantakyi who mediated the talks also announced FKF will withdraw the civil suit against the league organising body from the High Court.

In further welcome news for local top flight football fans, the controversial expansion to 18 teams has been shelved until at least 2016 with the contract between KPL and SuperSport to televise the top flight also running until the end of the season when all commercial and broadcast contracts will be renegotiated.

On the promotion and relegation, both FKF and KPL have until June to discuss the issue and sign a Memorandum of Understanding (MOU) on how many teams will join the top tier league and clubs to be dropped to the lower tier.

“We were lucky to meet a very willing and co-operative group who were ready to compromise on issues without sticking to entrench positions on the topical issues that has divided them,” Nyantakyi told a packed press conference in Nairobi.

“We had very fruitful conclusion and the interest of Kenya was paramount since both parties sacrificed their personal interest in favor of Kenyan football.

“Fifa is the legitimate body and not the court of law to resolve their differences and therefore, FKF should withdraw the case pending to allow the world governing body handle and settle the matter amicably,” Nyantakyi who was accompanied by Fifa East and Southern Africa Regional Development Officer, Ashford Mamelodi and Fifa Head of Member Associations, Primo Carvaro announced.

The delegation who were in the country for two days after meeting both factions separately, also declared that both leagues will run in a unique and transitional basis which means, the league run by FKF will be the recognised second tier.

“For Fifa it's very clear, we cannot have two top tier leagues running at the same time. At the beginning there was a suggestion that we go with two leagues and at end of the season merge but we said no because Fifa is for promotion and relegation. It has been agreed there will be promotion in KPL next season from FKF teams,” Carvaro declared.

Nyantakyi who pledged to follow up on the issues agreed to make sure they are implemented added, “The proposal by FKF which will be subject to discussion shall be an 18 team league which shall be considered and adopted by both FKF and KPL in an MOU.”

Among the proposal that were presented by the Fifa delegation on promotion and relegation, is that they either they drop two and promote six clubs or relegate two and promote four.

Nyantakyi led the FIFA delegation that brokered the peace deal

The decision favored Nairobi City Stars and Nakuru All Stars who were relegated last season only to be recalled when the stand-off persisted.

The Fifa delegation also directed the relationship between FKF and KPL will be regulated by the MOU where; the federation is the mandated authority to manage and control football in the country, the delegation of powers by FKF to KPL or any other subordinate league to run the Premier League on stated time and condition should also be agreed.

It was recommended that determination of commercialization of the league and all competitions be retained by FKF,  also to be discussed is the payment of commission and agreed fees by KPL to FKF, the determination of powers and limitation of KPL to organize any other competition apart from the league.

FKF was mandated to appoint executive of judicial bodies to arbitrate and rule on disputes arising from competition and disciplinary matters.

Both parties were ordered to review their constitutions, with KPL required to make sure it's in line with FKF statues and the domestic laws of Kenya.

The federation was also directed to review their rules, to ensure it conforms to Fifa statues and create an Elections Committee because it's an election year.

The Ghana FA boss appealed to FKF to reconsider their resolution of withdrawing KPL as their member in their next Annual General Meeting.

-Parallel leagues-
Top flight football was thrown into turmoil when the federation announced the formation of an 18-team competition at the end of last season against the wishes of KPL who were adamant on continuation of the 16-team format.

The league management body that came to being in 2006 insisted contracts with title and broadcast sponsors could not allow them to cater for the additional teams.

In a see-saw battle for supremacy, FKF severed links with KPL on January 28 before announcing the promotion of 14 National Super League sides to take the place of top flight clubs allied to the league organising body who refused to sign to their FKF Premier League mid last month.

This saw the advent of parallel leagues for the first time since 2006 as FKF went to court and obtained an injunction against KPL that lasted three weeks before being lifted by Lady Justice Roselyn Aburili last Monday.

Following the verdict, FKF boss, Sam Nyamweya, mooted the parallel leagues under the federation's banner to run in Zone A for KPL allied clubs and Zone B for the rest where the champion would be determined after a play-off between the top two finishers.

This proposal was termed unfeasible before the Fifa team arrived to thrash out what many Kenyans hope will be an end to the madness that has placed the country's club football on tenterhooks.

This is not the first time that Kenyan football has faced chaotic rivalries in its administration.

It took the intervention of the government to disband the national federation to end the crisis.

Nyantayki is seen as one of the rising football administrators in the world and the latest successful assignment by leading a FIFA delegation means his profile as an astute negotiator will further boost his profile among globally.

This development also means that he will be given more assignments by FIFA to solve problems devilling the game globally while gaining promotion among the top echelons of world football.