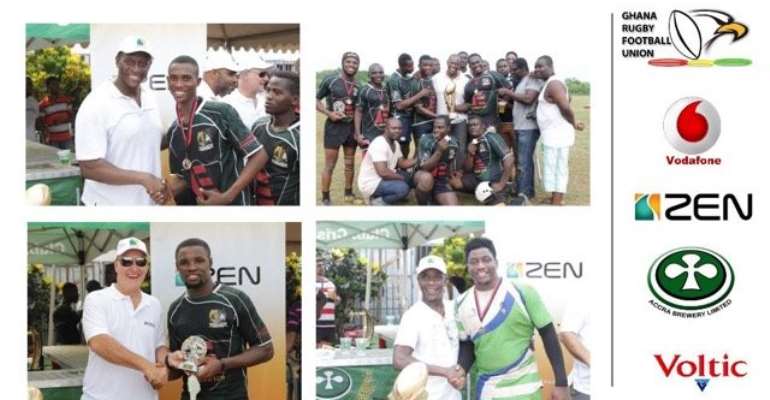 Cosmos Buffaloes RFC emerged winners of the historic Club Championship organised by the Ghana Rugby Football Union (GRFU) at the Legon Park on Saturday. In the 11 years history of Ghana rugby. This is the first time the competition has been organised at the professional level.

The Buffaloes defeated Madina based Idas Sports RFC 19 – 9 in a tense final which will forever be remembered by every rugby loving fan as a turning point for the Ghana Rugby Club Championship.

Cosmos displayed an incredible show of attacking rugby and were rewarded within 20 minutes with their first try and a conversion that gave them a solid 7 – 0 lead. A 28th minute foul helped Idas to grab an important 3 points through penalty.

The Buffaloes regrouped and managed to penetrate through the weak defence of Idas once again in the 37th minute to grab a second try to secure them 12 – 3 advantage as the game progressed towards half time.

Shortly after the break, a Cosmos player was sent off for rough play reducing his side to only 14 men. Idas fought back, capitalizing on the one man shortage of their opponents to score two penalty fouls to take their tally to 9 points.

It was anybody's game until the youthful exuberance of Cosmos overpowered the experienced but aged side of Idas. A strong run by Hamza Diaba Suleimana, who would go on to win the Most Valuable Player (MVP) award, sealed off victory for the Lapaz lads with their third try. That conversion stretched the tally to 19 – 9 in favour of Cosmos who won the covetous trophy for the 2014/2015 season.

Ghana Rugby received massive endorsements from the newly appointed Sports Minister, Dr. Alhaji Mustapha Ahmed, who was the special guest for the finals and closing ceremony of the season.

In an interview Dr. Ahmed said he will do exhaustive consultations to create opportunities for the development of the game to place rugby on a high pedestal. He applauded the giant task being executed by the GRFU to advance rugby in the country.

“When I get my brief I'll draw my plans but before then I will like to create opportunities for all the sporting activities within the country,” the Minister underscored.

Mr. Herbert Mensah, President of the GRFU who spearheaded massive improvements including the first successful professionally run Ghana Rugby Club Championship explained that the qualities that are missing in the Ghanaian society today are embodied in rugby. Players understand the issue of leadership, teamwork, respect, discipline and resilience, he said.

Mr. Mensah was grateful to stakeholders such as Accra Brewery Limited, Zen Petroleum and Vodafone for supporting Ghana rugby and noted that his administration will work assiduously to brand Ghana Rugby and raise the image high to the level where clubs can start generating funds.

He however chastised sports authorities for their lackadaisical attitude towards minority sports in the country and admonished government to honour its obligation to the GRFU.

“We know that the Ministry owes us GHC100,000 a year that has never being paid. Government has not been serious about minority sports; the National Sports Authority has been delinquent to minority sports. It is a culture that is not right in Ghana. We the custodians must put our foot forward and make it right,” he concluded.

The National Technical Director, George Nana Kojo Kumah Ladipo VII, was very excited about the progress of the game of rugby when he spoke in an interview with the media.  He is hopeful of international success for Ghana Rugby very soon due to the fast development that has been recorded in recent years.

He says the Union is making strides in the development of Rugby at the grassroots to unearth more talents at a young age.

The Tournament Commissioner, Mr. Steve Noi, was pleased with the successful championship and called for more sponsorship to make next year's championship better. He also praised the President of the GRFU, Mr. Herbert Mensah, for his leadership and vision that has placed Ghana Rugby on the road to greater achievements.

The Coach of Cosmos Buffaloes RFC was full of excitement for the victory which he attributed to the discipline exhibited by his team during the season. He says his team will train harder in order to retain the title next season.

The Manager of Idas Sports RFC, Mr. Abdul Samad Said, showed a lot of sportsmanship which is one of the tenets of Rugby by congratulating his opponents. He says he will begin massive recruitment to replace his aging team and called for corporate bodies to support his club.

Legal practitioner and public relations expert, J. Chester Anie who presented the medals to the runners-up, lauded the efforts of the GRFU in developing Rugby into a major sport. He encouraged young individuals to embrace the game because it teaches human relations and improves communications.

He said the sport has the potential to take the youth off the streets to occupy themselves with meaningful activities. 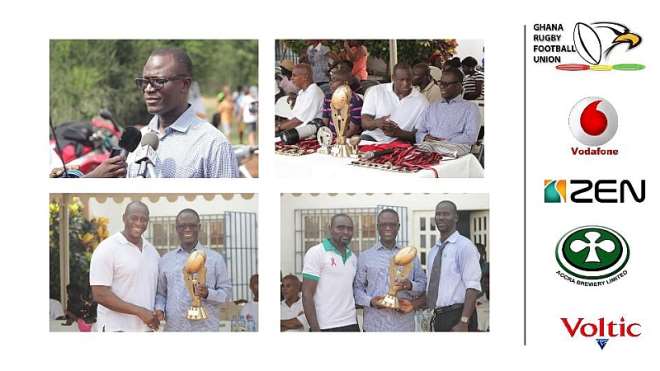 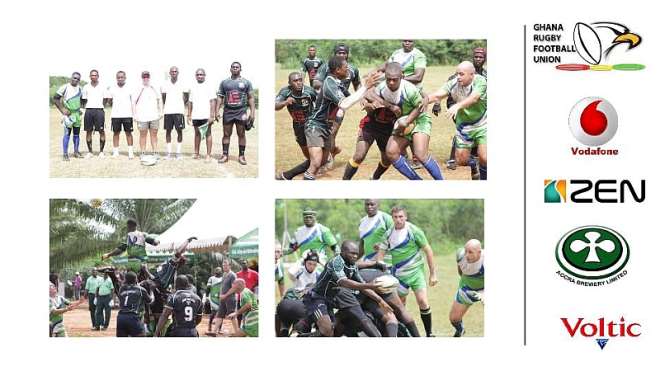 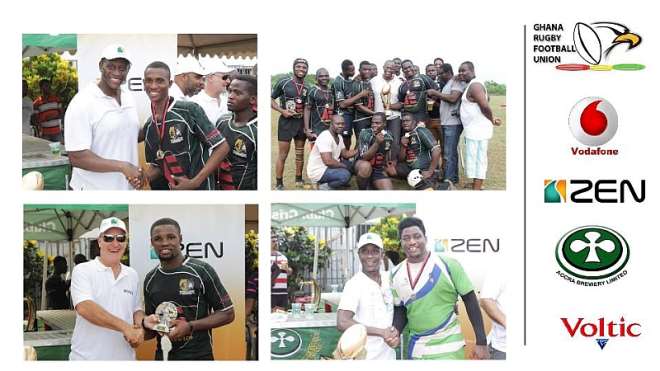 â€‹Various awards were up for grabs on the event of the 2014/15 Ghana Rugby Club Championship (1) Mr. Herbert Mensah, President of the GRFU, handed out the medals and tournament trophy to the winning team, Cosmos Buffaloes RFC. (2) Mr. Herbert Mensah joins some of the Cosmos Buffaloes team members who proudly displayed their medals and the tournament trophy. (3) A management member of one of the sponsors, Zen Petroleum, handed the Most Valuable Player (MVP) award to Hamza Diaba Suleimana of Cosmos Buffaloes. (4) P.R. Guru and Law Barrister, J. Chester Anieâ€‹â€‹, handed out the medals to members of the runners-up, Idas Sports RFC. 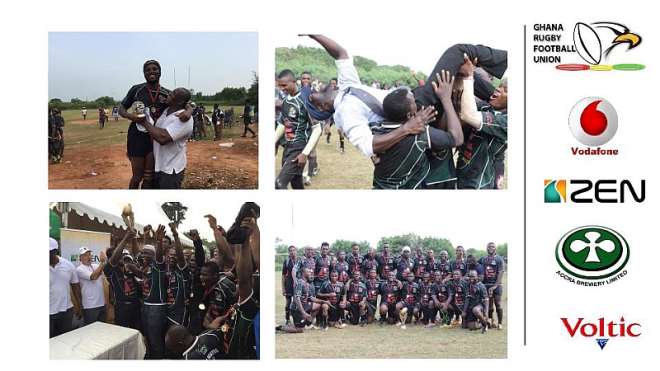 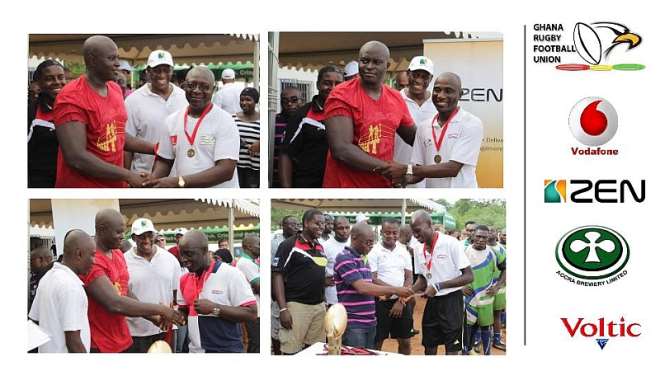 Special awards were also handed out by the Vice President of the GRFU, Mr. Ernest Hanson, to certain individuals who walked an extra mile to make the 2014/15 Ghana Rugby Club Championship a success. (1) Mr. Steve Noi, Tournament Commissioner (2) Mr. Abdul Aziz Isa, General â€‹Secretary of the Greater Accra Rugby Association (GARA) (3) Mr. George Ladipo, National Technical Director of the GRFU (4) Mr. Bright Dzameshie, President of GARA, also showed appreciation to the match officials who made sure that the GRCC was conducted in the spirit of fair play. 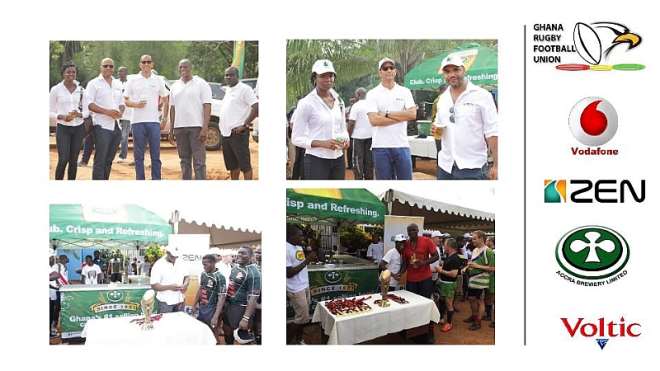 â€‹Mr. Herbert Mensah, President of the GRFU, expressed his gratitude to stakeholders who have supported the success of rugby so far and noted that his administration will work assiduously to brand Ghana Rugby and raise the image high to the level where clubs can start generating funds. (1) Mr. Herbert Mensah with management members of Zen Petroleum who supported the GRCC finals (2) â€‹Management members of Zen Petroleum who â€‹enjoying beverages from the other sponsor of the event, Accra Brewery Limited. (3&4) Accra Breweries supported the 2014/15 GRCC â€‹â€‹through the provision of Club Beer, Voltic water, minerals and other â€‹event materials and equipment.