No all-aGhanaian show: Donsah on show but Essien, Muntari missing at San Siro 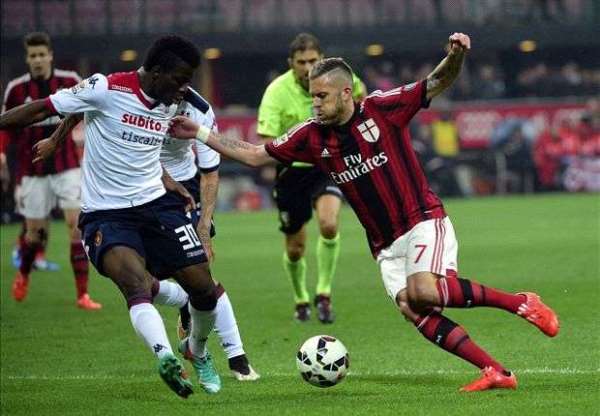 Godfred Donsah returned to action for Cagliari as they faced the AC Milan of senior compatriots, Michael Essien and Sulley Ali Muntari at the Stadio Giuseppe Meazza on Saturday night.

It was not a happy ending though for the 18 year old wonder kid whose side fell 1-3 added to the disappointment of watching his two countrymen only feature on the bench for the Rossoneri all long, albeit Essien coming on for Nigel De Jong in the 88th minute to help Milan consolidate and secure three important points.

Donsah has been missing since suffering injury after only 10 minutes of Cagliari's defeat to his former club, Hellas Verona three weeks ago but the youngster started for the first time under returnee coach, Zdenek Zeman as Cagliari sought to arrest a winless run now stretching to eight games (6 defeats).

In the end, not even Donsah could help Cagliari as they fell to a comprehensive 3-1 defeat after failing to hold on following Diego Farias' equaliser two minutes into the second half after trailing at the break.

Two minutes later, Milan were back in front thanks to the strike of Philippe Mexes on the assist of fellow Frenchman, Jeremy Menez who had put Milan ahead in the first half. Menez will seal victory on 78 minutes to hand Milan a first victory in four games and a jump up the Serie A table to 7th on 38 points from 28 games.

For Cagliari however, it was another empty return that sees them stuck to the relegation zone on 21 points and four points from safety ahead of the match day 28 fixtures of most of their direct competitors for survival in the Italian top flight.

Cagliari next host Lazio when Serie A resumes on April 4, the same day Milan travel to Palermo on match day 29 of the 2014/15 Italian term. Follow @thedonplato