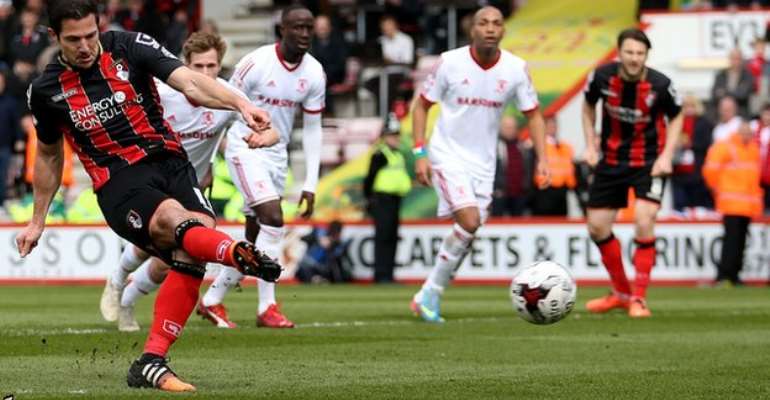 Albert Adomah was in full time action for Middlesbrough as they failed to take over Bournemouth at the summit of the Championship table after losing 3-0 against them on Saturday.

Middlesbrough went into the occupying second spot and could have assumed leadership of the table with victory bit slipped at the new table-toppers.

They leapfrogged Middlesbrough to return to the top of the Championship table after a dominant victory over their promotion rivals.

It was a return to winning ways for the Cherries with seven games to go. Boro, who failed to register a single shot on target, slipped to third.

Kermorgant's first-minute free kick, which stung the palms of Dimi Konstantopoulos, set the tone for the opening 45 minutes at the Goldsands Stadium with the hosts completely dominating proceedings.

The recalled striker fired home from the spot after Tomas Kalas hauled down Wilson in the area following a fine long ball from Arter.

Konstantopoulos was busy throughout the first half keeping out efforts from Kermorgant and Matt Ritchie, while Callum Wilson was also proving a menace up front.