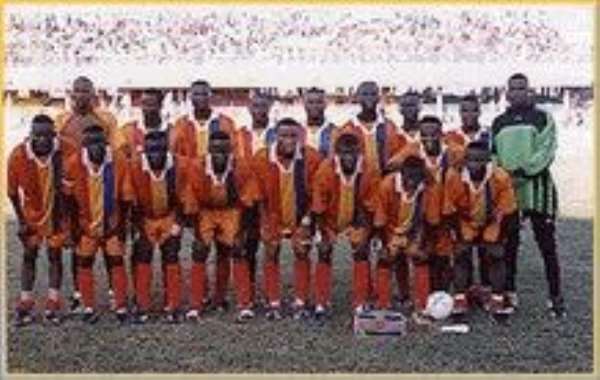 Accra, August 7, GNA - A third minute master piece goal from Hearts of Oak's Lawrence Adjah Tetteh on Saturday secured them the maxim points when they locked horns with Santos of South Africa in their Confederations Cup tie at the Accra Sports Stadium.

Adjah met a flip-on from Emmanuel Osei Kuffour and drove a 30-meter non-drop deceptive curling shot that zoomed into the yearning net that caught goalkeeper Wuest Ryan absolutely helpless to keep the fans chanting with ecstasy.

The reaction of the South Africans was swift as they won two corner kicks on the trot but lacked the composure to harm jittery goalkeeper, Eben Dida in post for the Phobians.

Hearts who played the game without a substantive coach due to the exit of Ernst Middendorp conceded the midfield to their opponents, being a shadow of their act in the engine room, which was perfectly manned by Otieno Ongau Musa and Adrendze of Santos.

However, it was the homesters who were gifted with several scoring chances to consolidate their lead but Lawrence Adjei and Prince Tagoe somehow blew off all the decent chances that were created.

The Hearts following were made to sit on thorns in the later part of the first half when Dida conceded a free-kick in the vital area by committing a needless blunder when he wrongfully bounced the ball after earlier saving a tricky situation.

Hearts resumed the second half a rejuvenated side and kept Santos goal area boiling with series of onslaughts led by Louis Agyemang and Tagoe who for some reason missed from close range.

Hearts stand-in coach, Ofei Ansah in a bid to strengthen his attack, replaced sluggish Kuffour in the last quarter with Bernard Don Bortey whose impact was rarely profitable.

However, the inclusion of Ablade Morgan for Tagoe few minutes later slightly favoured the Phobians who exhibited great act of creating chances with the Agyemang-led striking force attacking in droves but lacking the finishing power to kill off the game.

One of the brightest chances fell to Adjei who possessed no composure upfront and amazingly lobbed straight to touch after racing ahead of his markers in a chance that would have been easier to score than to miss with five minutes of regulations time.

Like their "Never Say Die" slogan, Hearts kept their feet on the accelerator and probed for another goal which proved elusive, a reason which gave their followers little to cheer about in spite of their victory.

Hearts currently lead the four-club mini league table with three points ahead of Santos, CotonSport of Cameroon who are billed to meet the winner of Orlando Pirates and Sable De Betie on August 15.