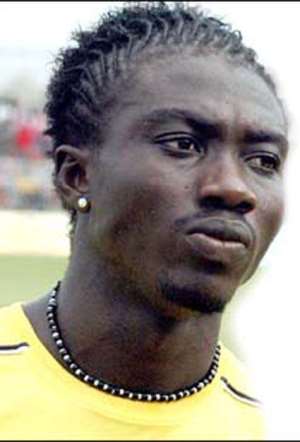 Bernard Dong-Bortey was handed a 1-year ban by the Disciplinary Committee of the Ghana Football Association (GFA) for assaulting a match official in Aduana's FA Cup win over King Solomon, a lower division side.

The Aduana Stars midfielder, who is no stranger on the disciplinary table throughout his football career, was handed his heaviest punishment ever following a hearing into the case after the FA Cup match against King Solomon on January 21, 2012 at the Agyemang Badu Park in Dormaa.

According to the Disciplinary Committee, Don Bortey, then 29-years was found guilty of the charge, which blighted the match that saw Aduana Stars win by a lone goal.

'Dong-Bortey has been issued a suspension for a period of 12 months. The player assaulted the centre referee during an MTN FA Cup Round of 64 match with King Solomon on January 21, 2012' a GFA statement read.

The ruling therefore means that Dong-Bortey can only return to action next January, 2013.

A former national youth star, the talented mid-fielder's career has been dogged by controversies on and off the field during his days with Accra Hearts of Oak and recently with Aduana Stars.

After almost eight seasons with Hearts, Dong-Bortey joined Aduana Stars in 2010 powering them to their Premier League title in their maiden season in the top flight.

Dong-Bortey  featured for the Black Stars six times between 2002 and 2004 and was also  part of the Hearts of Oak team that beat Kotoko to claim the CAF Confederations Cup in 2004.