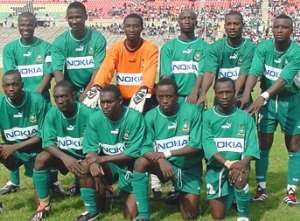 King Faisal completed the double over Accra Hearts of Oak to lift the Ghana Olympic Cup at the Kumasi Stadium yesterday.Faisal beat Hearts 1-0 to win the trophy 3-1 on aggregate, having won the Accra match 2-1.

Alhaji Grunsah's boys were full of fight and Hearts were for the greater part of the game reduced to mediocrities. It was a terrible experience for the Phobians who are billed to go into action this weekend in a tough Confederation Cup match against Santos of South Africa in Accra.

In a match well patronised by Kumasi fans, Faisal kept Hearts' area under siege in the first quarter hour, but that bulky striker, Owusu Ampomah, squandered glorious opportunities in the 10th and 14th minutes. Ampomah brought the best out of Hearts keeper Eben Dida in the 16th minute when his cracking shot was tipped over the bar.

The Hearts rear leaked badly on the right where Kwame Antwi and Eric Nyarko operated, and it was surprising that Nyarko who gave away the only goal was allowed to finish the game.With twin strikers, Prince Tagoe and Louis Agyemang, closely marked by Shilla Illaisu and Abass Innusah, Hearts struggled to find a route through the Faisal backline.

And when Lawrence Adjei managed to cut out on the right in the 22nd minute, his shot went wide off the bar. Kwabena Boafo took over from a weary Edmund Copson from the re-start, while Bernard Dong Bortey and Abdul Samed Okocha were substituted by Ablade Morgan and Michael Donkor in the 55th minute and 58th minutes respectively.

The changes brought some fire into the Hearts game, but working the ball through the middle was always a difficult journey to reach the goal area.The deadlock was broken in the 67th minute when a visibly panicky Eric Nyarko gave the ball away to Prince Antwi near the edge of the box.

The midfielder, on finding Dida off his line, intelligently lobbed the ball over him into the net. Assistant Referee E. T. Allotey who came up with some controversial decisions was pelted with bagged water, and the police had to move in quickly to give him protection.

Thanks to mobile money interoperability, 15 million Ghanaian...
4 minutes ago