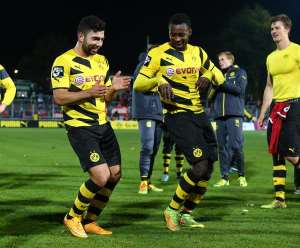 The Yellows needed the late goal from the 22-year-old Ghanaian midfielder after Timo Furuholm had scored a 43rd minute first-half goal to put the visitors ahead.

Nyarko nodded home a perfect finish just when Dortmund thought they were ending the game without a point to help them earn a point from the game.

With American-born Ghanaian Joseph Claude-Gyau missing in action for Dortmund, the Nyarko was introduced in the 65th minute to shore up their midfield and he made his impact count as he scored a late equaliser for them.

It was his first game of the season for his side –  he has featured in 23 games for Dortmund II but is yet to get a first team call.