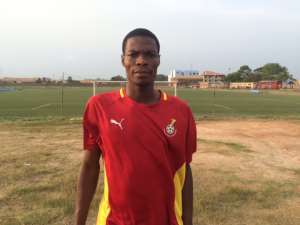 Bechem United's Noah Martey is Ghana's best home-based player , this is according to his agent Oliver Arthur.

The U-20 star, he argues, has already emerged as a legitimate MVP candidate for this season.

The defensive midfielder has scored four goals and provided an assist in the opening seven matches of the FCP Premier League season.

He had stood as Bechem United's best player  after Augustine Okrah in the last league campaign.

Martey, 19, has been in devastating form this season, prompting the ace football agent to argue that he has played better than any other player in the Premier League season.

Speaking in an Interview from Italy ahead of the Ghana-Nigeria Under-20 friendly in which Martey will play for the Black Satellites, Arthur said Noah Martey is a future candidate for the Black Stars' squad because of his 'amazing technical ability and enviable work rate '.

'I have no doubt who the best player in Premier League is – it's Noah Martey. Why? Because he has been unbelievable this season, scoring goals from the defensive midfield position and delivering exceptional performances week-in-week-out”