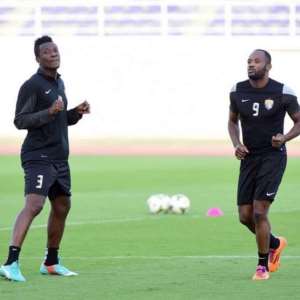 The 29-year-old returned to his base in UAE only on Saturday after leading the Black Stars to a silver-medal feat at the 2015 Africa Cup of Nations.

Gyan played the entire tournament hosted in Equatorial Guinea without being fully fit - with illness and injury taking its toll.

But the former Sunderland man appears to have proved his fitness in just three days of training with the boss to make it into the squad for Thursday's league clash.

Al Ain coach Zlatko Dalic revealed: 'The player Asamoah Gyan is on the list for the match against Fujairah.

'And the readiness of the player [Asamoah Gyan] will determine the time period for taking part in the confrontation.'

Gyan finished the 2015 AFCON with an abdominal injury sustained in the quarter final win over Guinea.

He was however able to last 119 minutes in the final match which Cote d'Ivoire eventually won through penalties.