Young and talented: Evans Osei fired up for Black Satellites 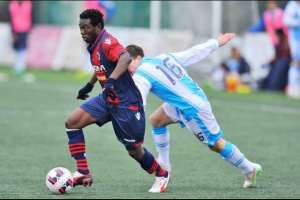 Young attacking midfielder, Evans Osei can't wait to finally get the chance to announce his potential to the world with Ghana's U-20 national team in this year's Africa Youth championship and hopefully, the FIFA U-20 World Cup.

The youngster is one of only two foreign based players currently in camp with the Black Satellites who are expected to fly out of the country on Friday to Turkey where they will camp ahead of their arrival in Senegal three days before the commencement of the March 8-22 tournament.

Osei and Paul Quaye of Malaga, Spain are the only two of seven Europe based players invited by the Black Satellites technical team to report for the Ghana leg of the camping which rounded up preparations with a 0-2 loss to an impressive Nigeria side at the Tema Sports Stadium on Wednesday.

Spain based Clifford Aboagye (Granada) is confirmed to join the team in Turkey but four others, Thomas Agyepong (Manchester City, England), Emmanuel Boateng (Rio Ave, Portugal), Osei Barnes (Pacos Ferreira, Portugal) and Emmanuel Oti Essigba of Liverpool, England however did not respond to their invitation.

The Satellites are housed in Group B with South Africa, Mali and Zambia of the 19th Africa Youth championship where the top two in each group not only makes the semi final but qualify for the FIFA World Youth Cup scheduled for New Zealand May 30-June 20.

But the Black Satellites technical team headed by 2009 winner, Sellas Tetteh deserve a huge commendation for spotting and inviting such a talented player as Evans Osei who has been making waves in Italy since departing the shores of Ghana last year.

An extremely talented midfielder, he trained with Bechem United in Ghana before joining Juve Stabia in Italy's third tier league. Just after some few games, former Serie A hotshots, Bologna took him on loan for the rest of this season with the option to buy in their quest to claim promotion back into the top league.

Before his departure to Bologna, Osei had ensured his place in Juve Stabia folklore by coming off the bench with three minutes to go to score the only goal of the game in injury time to give Juve Stabia victory at at Paganese in a league game in October.

In fact, Stabia won all five league games played for the club by the 17 year old who even giants AC Milan were reportedly ready to meet his â‚¬500,000 price tag.

Before flying down to Ghana to join the Black Satellites camp, Evans Osei also was the best player in the Bologna team at the just ended Via Reggio U-19 tournament for Italy's top teams.

Even though he could not help the Black Satellites avoid defeat to Nigeria as a second half substitute in yesterday's friendly game, Ghanaians can be assured to get more football heroics from Evans Osei during the tournament in Senegal and even beyond. Follow @thedonplato