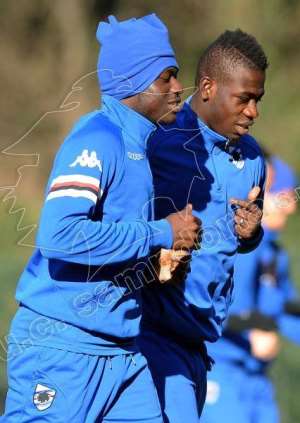 By Akyereko Frimpong Manson
Follow Akyereko on Twitter: @AkyerekOfficial
Ghana's AFCON star Afriyie Acquah is expected to mark his official debut for Sampdoria in the Italian Serie A on Sunday evening.

The 22-year-old passed medicals on Wednesday and has trained with i Blucerchiati and Serbian gaffer Siniša Mihajlovi? has named him in his squad for the trip to Chievo Verona on Saturday.

Acquah joined Sampdoria from Parma during the winter transfer window as the club set their sight on signing top players for their campaign with African football legend Samuel Eto'o also joining.

Though Eto'o has played two Serie A games for them, this is going to to be Acquah's first game for the club.

Afriyie Acquah trains alongside Samuel Eto'o
He posted a picture of himself and his wife on Instagram, writing he is going to make her proud on his official debut for Sampdoria.

Sampdoria are convinced Acquah can shore up their midfield after witnessing his performance for Ghana at the 2015 AFCON as he won the Man of the Match award in the final game between Ghana and the Ivory Coast which went through to penalties.