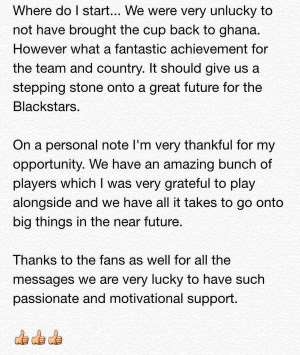 Ghana striker Kwesi Appiah has penned a thankful letter to salute Ghanaians for their support after making his debut at the 2015 African Cup of Nations.

The Crystal Palace player took to instagram to issue his message in which he believed Ghana was unlucky to have won the tournament in Equatorial Guinea.

Appiah scored one goal and provided one assist in five matches as the Black Stars won silver after losing 9-8 on penalties to Ivory Coast in Sunday's final in Bata.

The 24-year-old the fair play award of the tournament, and was crowned man of the match in Ghana's 3-0 quarter-final win over Guinea.