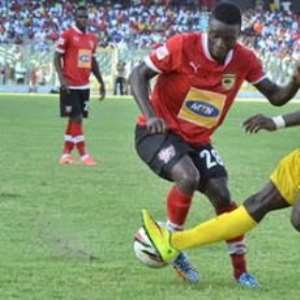 Kumasi Asante Kotoko surrendered a solitary lead, as they were beaten 2-1 by league leaders Ashgold at the Obuasi Len Clay Stadium yesterday.

Kotoko, who were beaten 1-0 by arch rivals Hearts of Oak on Saturday, stormed Obuasi with determination to return to winning ways.

The Kumasi-based club started brightly as they bombarded the area of the home team in the early stages of the contest.

Kotoko's incessant pressure yielded dividend as they broke the deadlock through Lattif Mohammed in the 15th minute.

Kotoko, after goal, lifted their feet off the accelerator, as they allowed Ashgold to gradually crawl back into the game.

It therefore came as no surprise when the miners deservedly fetched the equalizer in the 36th minute when Mohammed Yakubu scored from the spot.

From recess, Ashgold, backed by the home fans, pushed more men forward probing for the match winner, but they were always prevented by Eric Ofori Antwi in goal for Kotoko.

The miners did not give up as they sustained the pressure on Kotoko which eventually resulted in the match winner through Bernard Morrison's splendid effort in the 73rd minute.

Ashgold, after the goal, recoiled into their shell, sustaining the pressure and always tried to catch Kotoko on the break; but neither of the combatants could score again.

It was all joy for the Ashgold fans when the match was brought to an end with their team bagging all the three valuable points at stake.