Ayariga defends $25,000 Stars reward; says it's token for risking their lives in Malabo 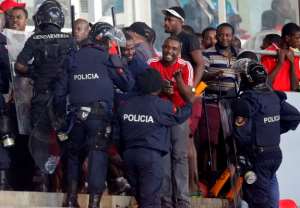 Youth and Sports Minister Mahama Ayariga has parried accusations that the $25,000 reward given to the Black Stars is unnecessary.

He said if only such critics were present at the Estadio de Malabo when host supporters threw bottles at players, fans and tried to beat them up then they will know that $2,500 was not even enough.

Mahama Ayariga even urged more corporate organisations to step in and provide financial rewards to the Black Stars to encourage them in future tournaments.

A section of Ghanaians have been vehement in their criticism of the $25,000 reward announced by President John Mahama, Tuesday.

The reward is supposed to be coming from the lead Black Stars sponsor GNPC.

But some Ghanaians are not happy with the reward. Given the current economic and power situation in the country, the critics claim the monies would have been put to better use than to be offered as reward to the Black Stars.

"They should have invested that money in the electricity problem we are having right now so that they solve it for us," one fan stated.

"I think it is rubbish. The amount of money they giving to them is too much. They are playing for the nation. We didn't go and hire them to play for the country," another said.

But Ayariga disagreed. He told Joy Sports "for those who think that GNPC rewarding the boys with 25,000 is too generous i wish they were in the stadium when the whole of Malabo was throwing stones and bottles and the armed forces and police were deployed to come and save our lives.

"I wish they were in the stadium and then they will know whether $25,000 is worth that kind of experience," he said.

"I don't even think it is enough," he added.