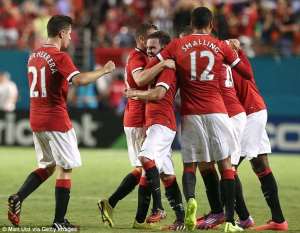 Several  Manchester United  players are reportedly being investigated by club officials after reports surfaced regarding the making of an alleged sex tape involving a member of the squad in a night club.  The Sun 's  Rachel Dale  (h/t the Independent 's  Simon Rice ) reported the news.

According to Dale, a woman was filmed "carrying out an intimate act" on one of the club's "international stars" in a bathroom, with team-mates capturing the act on camera while filming over the top of the door.

The woman reportedly spoke of the incident, saying, 'I have been crying my eyes out and I am not going to go into details about it now.'

A source elaborated to Dale, saying the unidentified woman fears the video will be passed around the squad and that she is well-known among the players, as they move in the same "celeb-circles."

Tory MP John Whittingdale reacted to the news, per The Sun, speaking about the role Premier League players have as someone people look up to:

"Premier League players like Manchester United's are watched by millions of people, and they do have a duty.

They are role models for vast numbers of young people and one would hope they'd set a good example. They need to act responsibly."

The Red Devils have yet to comment on the allegations, and with no specific players mentioned in the article, it is doubtful Louis van Gaal will openly address the rumours.