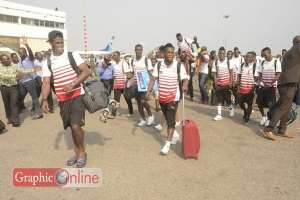 Each Ghana player will earn US$ 25,000 for finishing runners-up at the 2015 Africa Cup of Nations, President John Mahama announced on Tuesday.

The Black Stars came close to winning a fifth continental title but missed out to Ivory Coast who triumphed 9-8 on penalties in Sunday's final played in Bata.

Ghana were on the brink of early elimination at the tournament when they lost their opening Group C match to Senegal.

But Avram Grant and his charges dusted themselves off that slow start and won their remaining Group matches against Algeria and South to reach the knockout round.

They then clinically dispatched Guinea 3-0 in the quarter-final and replicate that scoreline against hosts Equatorial Guinea in the semis.

“And for achieving that feat, we are grateful to the team and this is a team for the future and the sky we know will be the limit,” Mahama confirmed after meeting with the players at the Flagstaff House in Accra on Tuesday.

“Government is pleased to announce that we are giving each one of you an amount of US$25,000 for going that far.”

Ghana players pocketed US$ 50,000 each for reaching the final of the Nations Cup.