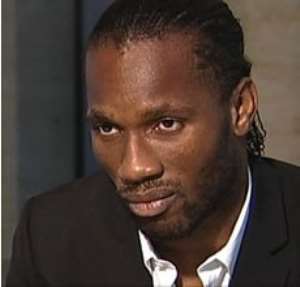 Didier Drogba led the celebrations as Ivory Coast ended more than two decades without a trophy by  beating Ghana on penalties  to lift the Africa Cup of Nations on Sunday night.

The Chelsea striker, who retired from international football last year after earning a record 104 caps,  posted a video on Instagram  of the moment when goalkeeper Boubacar Barry scored the winning penalty with the message “Coooopaaaa faut marquer buuulaaaaa cooooopaaaaa!!!!!!!!!”.

Drogba featured in three finals for Les Éléphants but never finished on the winning side. Thousands of supporters flocked to the Stade Félix Houphouët-Boigny in Abidjan on Tuesday to await the team's return from Equatorial Guinea having been encouraged to do so by President Alassane Ouattara.

After being drafted in as a replacement for regular goalkeeper Sylvain Gbohouo had suffered a thigh strain, understandably it was Barry – a 35-year-old who plies his trade for Belgian side Lokeren – who was the toast of a nation.

“This is a great day,” Barry told French broadcasters Canal+.

“It is the ninth birthday of my son today – God does not do things by accident. I have been criticised. I'm not big in talent, or size, but I want to progress and I have shown the critics.”

Barry then appeared to break down as he paid tribute to his mother's support throughout his career.

“My mum suffered. Thanks to her, thank you to all Ivorians. Football allowed me to travel, there is no room for everyone, but there is room for the work. God rewarded me.”

Former Chelsea striker Salomon Kalou also paid tribute to his side's success, posting a picture of him with captain Yaya Touré  when they were teenagers on Instagram with the message, “We started from the bottom now we here. With my bro #yayatoure #championsleagues #premiereleague #facup #carlingcup #africancup. I'm glad we went for everything they said we couldn't have. And it was just a dream not long ago. Bravo a toi mon Frero #avecclass”.

Coach Hervé Renard became the first man to win the  Africa Cup of Nations   with two different countries having previously led Zambia to the title in 2012 with a penalty shootout victory over Ivory Coast. The Frenchman described the victory as “magic for everyone” in a country.

“I'm happy for the Ivorian people. They have been rewarded,” he said.

“This victory is magic for everyone. It brings [together] even those who do not share the same opinions.

“Ivory Coast will be delighted and this is the most important thing.”

Renard added: “I felt we could win this tournament after the game against a great Cameroon. We were in a very difficult group and the players did what we never imagined.

“At 2-0 down on penalties, I told myself that history would repeat itself, there was belief to the end.

“Just before Barry hits the penalty, I said, 'a goalkeeper who worked with Jean-Marc Guillou is able to pull it off'.”