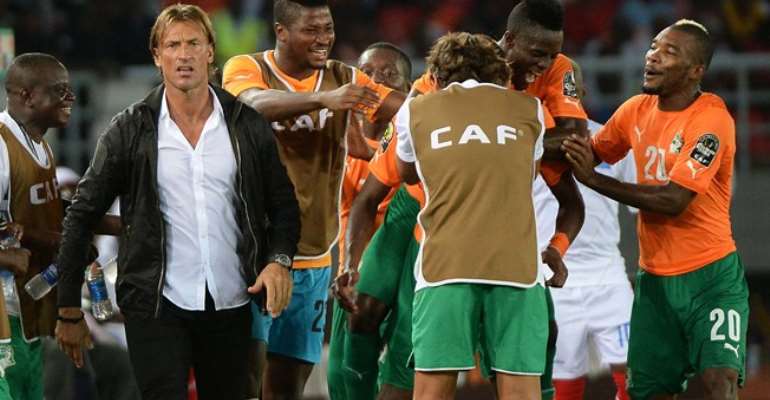 Côte d'Ivoire  coach Herve Renard dedicated a dramatic  CAF Africa Cup of Nations  final triumph on Sunday to the people of the country.

The Elephants edged west African neighbours Ghana 9-8 on penalties in the Equatorial Guinea city of Bata after a 0-0 draw following extra time.

“We dedicate this win to the Ivorian people,” said the Frenchman who guided Zambia to a penalty shootout victory over Ivory Coast in the 2012 final. “Football has this magic element in that it unites all the ethnic groups – all the people who perhaps don't think the same way. Ivory Coast is more than delighted today and that's the most important thing.”

Title successes for Renard with Ivory Coast and Zambia make him the first coach to win the Cup of Nations with different countries. It was the second time the Ivorians have conquered Africa, and the first success in 1992 also came against Ghana on penalties following a goalless draw.

“I'm very happy for the Ivorians, who have been waiting for this for 23 years. My message since we started the training camp on January 5 has always been the same, even when we started the first half badly against Guinea, we always stayed on course, we had to say some home truths.

“The players put in a lot of effort and today they've been rewarded. In life you can lose, but the important thing is always to bounce back and never give up.”

Captain and midfielder Yaya Toure said: “When you win with your club it's magical, but with your country it's incredible, exceptional. I had been waiting to lift the trophy for who knows how long. As a captain, it's so special. It's a breath of fresh air. Our chance finally came. I am so happy and relieved.

“I think about all the people who provided me with advice, I think about my family. The coach was very good to us, he knows African football and he did a great job. We have been criticised, sometimes harshly, but he helped us stay on course,” said the four-time and reigning African Footballer of the Year.

“I have been playing for Ivory Coast for eight years, I have lost two finals and once in the quarter-finals. It's always difficult to deal with. A penalty shoot-out is very difficult. It's something I hate even if I quite like penalties during the game.

“In 2012 (final against Zambia), against the wishes of the coach, I didn't take a penalty. My brother (Kolo) did but he was unlucky. We need to thank Copa Barry. He's gone through some difficult times, especially at home where he's been criticised.

“He's giving us the trophy today. After (Sylvain) Gbohouo's injury, the coach talked to him so he'd stay focused.”