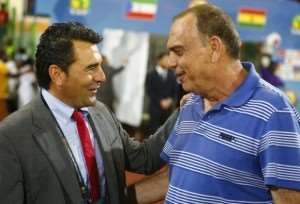 Avram Grant, coach of African Nations Cup finalists Ghana, has made a whirlwind start to his new job by steering them to the final of the competition with just seven weeks in charge of the Black Stars.

The Israeli was among a handful of high-profile candidates shortlisted to take over after the sacking of coach Kwesi Appiah in September.

His appointment was only settled after Ghana, who meet Ivory Coast in Sunday's final, had successfully completed their qualifying campaign under caretaker coach Maxwell Konadu.

Grant, who turned 60 on Friday, had one month to do his homework before meeting his squad for the first time in Accra on New Year's Day and then taking them on a brief training camp in Spain.

Five weeks later and he is one match away from doing what no coach has been able to achieve with Ghana since their last Nations Cup title success in 1982.

Grant's previous experience as a national coach came from 2002-06 with Israel and he just missed out on a playoff spot for the World Cup finals, going unbeaten but finishing behind group rivals France and Switzerland.

His friendship with Chelsea's Russian owner Roman Abramovich saw him move to the London club after a brief tenure as technical director of Portsmouth.

Grant was initially director of football at Chelsea and then took charge of the first team in September 2007 alongside Steve Clarke, replacing Jose Mourinho.

His reign lasted eight months during which time the team lost to Tottenham Hotspur in the 2008 League Cup final and to Manchester United on penalties in the Champions League final in Moscow.

Two years later he oversaw a remarkable FA Cup run as Portsmouth coach but there was to be no trophy for the cash-stricken club as they lost in the final to Chelsea.

Grant then had a short unsuccessful spell at West Ham United before leading Partizan Belgrade to the Serbian league title.