AFCON 2015: Ghana to meet Ivory Coast in final if they defeat Equatorial Guinea 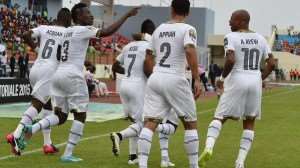 Ghana will meet Ivory Coast in the final of the 2015 Africa Cup of Nations on Sunday if they Black Stars beat hosts Equatorial Guinea on Thursday night.

The Black Stars will take on the Nzalang Nationale in the second semi-final in Malabo seeking to reach the final and win the trophy for the first time in 33 years.

Victory for Ghana will mean they will face Ivory Coast in the final to be played on Bata on Sunday.

The Elehpants secured their place in the final on Wednesday night with goals from Yaya Toure and Gervinho helping them to a 3-1 win over Democratic Republic of Congo in the Estadio de Bata.

Ivory Coast will play either Ghana or host Equatorial Guinea in Sunday's decider. They meet in the second semi on Thursday.

Ivory Coast's run of unexpected disappointments meant it hasn't won the African title since its one and only success in 1992.