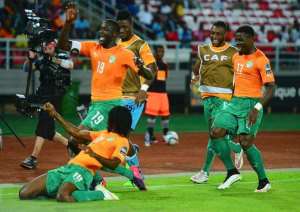 Ivory Coast are in the final of the 2015 Africa Cup of Nations.

The west African country started their tournament a little below the bar that had been set for them. Playing out two draws in their first two group games and qualifying via a solo goal against their last group opponents was a low start for the Ivorian team.

But the nation grew into the tournament as the competition went into its serious mode and Ivory Coast have shown every bit of a prospective champions.

Yaya Toure and his team mates booked a semi final date with DR Congo after eliminating tournament favourites Algeria in their first knock out game.

DR Congo had shown enough mental strength with a ground breaking AFCON 2015 comeback and quickly reminded the Ivory Coast fans of their heroics in the game against them on Wednesday.

Yaya Toure who had received mixed reviews in the tournament so far for his performance reminded all football fans across the continent why he is currently the best player in Africa.

Toure's new club team mate Wilfried Bony worked his way from the left hand side of an Ivory Coast attack to put in a shot but failed. The ball run into the path of Ivory Coast captain Yaya Toure who sent in a potent shot to leave DR Congo goalkeeper gasping for nothing as the ball entered into the net to put Ivory Coast 1-0 up.

DR Congo quickly responded within a minute to score an equalizer from the penalty spot.

Ivory Coast handled the ball in their own penalty box after a cross was put in by DR Congo which Mbokani stood up to convert.

The side that masterminded a comeback against country neighbours Congo however failed to hold on  to the draw as Gervinho grabbed a leader to send Ivory Coast into the interval 2-1 up.

Wilfried Kanon sealed the deal for Ivory Coast after the break as his 68 minute goal proved to be the last of the game, giving Ivory Coast a 3-1 win over DR Congo.

The two teams await the results of the game between Ghana and hosts Equatorial Guinea to know who they'll play in the final and third place play off for the 2015 Africa Cup of Nations.