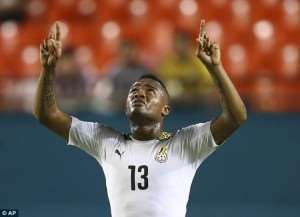 Ghana coach Avram Grant has mounted a spirited defence of his under-attack striker Jordan Ayew urging critics to support the youngster insisting that supporters must not insult the Lorient player for his dedicated services to the country.

The experienced Israeli manager bemoaned and slammed the culture of insulting players by the Ghanaian media and supporters when players have difficult time in matches for the country.

Ayew has been on the chopping board right from the start of the 2015 Africa Cup of Nations as his critics continuously called for his exclusion from the starting XI.

Grant believes the youngster will be very helpful to the Black Stars in future despite the insults directed at the son of legend for his performances at the ongoing 2105 Africa Cup of Nations tournament in Equatorial Guinea.

“It was first Kwesi Appiah, and later John Boye and many other players. The players are giving everything for the country. They are fighting; they are doing everything to be successful,” Grant said.

“The players are giving everything for the country. They are fighting. People can speak about his (Jordan Ayew) mistakes; it's not a problem, but they need to respect them,” the Ghana coach Grant said.

“They need to respect them but not to hang them after every bad game. That is not right. I don't accept it.

“It's not good that after every bad game they want to give up on a player because it's not right.

“Jordan Ayew is a very good player, he has given a lot to the national team in the past and I am sure he will continue to do that in the near future.” he added.

Ayew was dropped from Ghana's starting team in their match against Guinea but only came after the media and a section of the public called for his axing.