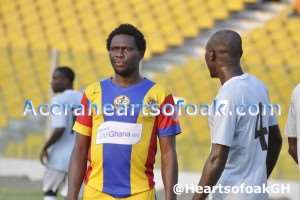 Fiamenyo, 23, has lit the Ghana Premier League with as many as five goals in three matches for the former League champions.

The former Heart of Lions has rediscovered his form after struggling with injuries last season.

Addo kept faith with Fiamenyo despite the mounting criticism over his performance but the club's trainer says his (player's) positive attitude is bearing fruits.

““I am not surprised at all, in fact none of us at the technical team is surprised he is scoring goals because we know what we have instilled in him and the results are evident,” he said.

“He is one of the few old players I decided to work on to bring the best out of, and he availed himself to instructions; that has brought  him this performance.

“He is just getting started and it is our belief that no form of injuries will affect him or any of the players in the team so that we can reach our goals this season.”