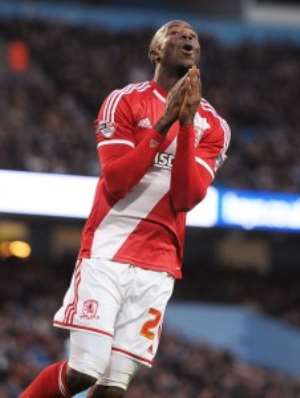 Albert Adomah admits Boro could get “rolled over” by Brentford if they don't show the right attitude in the crunch promotion clash at Griffin Park tomorrow.

But the flying flanker insists that won't be the case and says Boro's buzzing players are fully focused on the job in hand.

Brentford were widely expected to spend the season battling the drop after winning promotion from League One last season but are enjoying a remarkable campaign and sit just two points off top spot.

Boro head for Griffin Park having stuffed the Bees 4-0 in their last meeting and on the back of that stunning result at the Etihad in the FA Cup.

And Adomah wants to build on that result with another victory that would see Boro open a four-point gap on tomorrow's opponents.

“When you beat a big team obviously there are always people who question whether you can do the same against a smaller team,” said Adomah.

“Against Brentford we can show up with the right attitude.

We can't show up thinking because we beat Manchester City we will roll them over because that's not the case and it could be us that gets rolled over.

“Hopefully we can beat Brentford, get the three points and create that gap.

“When you win games there's always a happy good felling around the the club and it helps everyone.

“If we could get the victory that would be spot on.”

Due to his West London roots, Adomah has a soft-spot for the high-flying Bees and he's delighted to see them battling for a spot in the top six.

“I'm not surprised with them,” he told the club's website.

“I know we beat them 4-0 at home but we haven't played them away so we don't know what to expect at this moment in time.

“They seem to be doing well at home and away, beating bigger teams.

“Anything can happen, we have to be wary of them even though they might be a smaller club – they're still doing well in the Championship.

“It's good for them getting supporters in and expanding the stadium. Hopefully that'll help them out.

“Obviously I want Middlesbrough to get promotion but if it happens for Brentford then fair play to them, they've done well.”