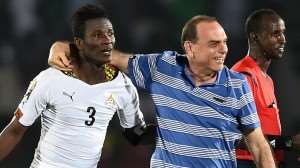 It is not clear what is happening in other team camps, but Ghana team officials are determined to keep the Black Stars away from the public eye in their campaign at the 2015 African Cup of Nations (AFCON), and have managed to do quite a decent job on that.

Since their arrival in Mongomo, Coach Avram Grant has insisted that neither the media nor fans are given access to the players, in a determined bid to keep them away from any possible distractions.

Their training exercises have been held behind closed doors and with the exception of the mandatory sessions, their off- the- pitch activities have also been kept very private even to the point that the coach refused to allow any interactions when they came down from their rooms to the restaurant.

The security detail attached to the team has been strongly urged to keep the lobby of the hotel 'cleared of the nosy media as well as fans eager to catch glimpses of their players and possibly have some photo shoots.

“For once we are enjoying some peace and serenity. We do not have to eat or drink worrying about who is watching and judging us by the amount of food we eat or water we drink,” assistant coach Maxwell Konadu told the Daily Graphic.

George Afriyie, chairman of the Stars management committee, said it was a decision taken by the committee and it was working to perfection.

“The post-2014 World Cup brought up the complaint that there were too many people hanging around the team unnecessarily,” Afriyie said.