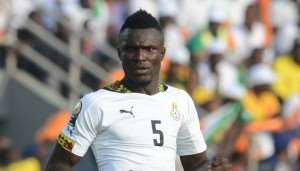 Ghana coach Avram Grant says he will continue to tinker with his starting line-up at the 2015 Africa Cup of Nations as he wants to give opportunities with the Black Stars players on the bench.

The Black Stars are through to the quarter-finals of Africa's flagship football competition and has given opportunities to some previously bench warmers in the squad.

Midfielder Afriyie Acquah has taken the position of Rabiu Mohammed while Emmanuel Agyemang Badu made way for Mubarak Wakaso in yesterday's 2-1 win over South Africa.

Daniel Amartey has taken the place of John Boye while Mohammed Awal, Kwesi Appiah, Solomon Asante and Mahatma Otoo havew all been given playing time at the tournament.

Grant says because of the tough nature of the tournament he wants to give playing to all the players to ensure that their energy is intact.

“We want to use all the players we have. We are playing games every four days so it is important to use the players to change the games because every game is different,” Grant said.

Ghana will now face the runners-up in Group D in Malabo on Sunday.