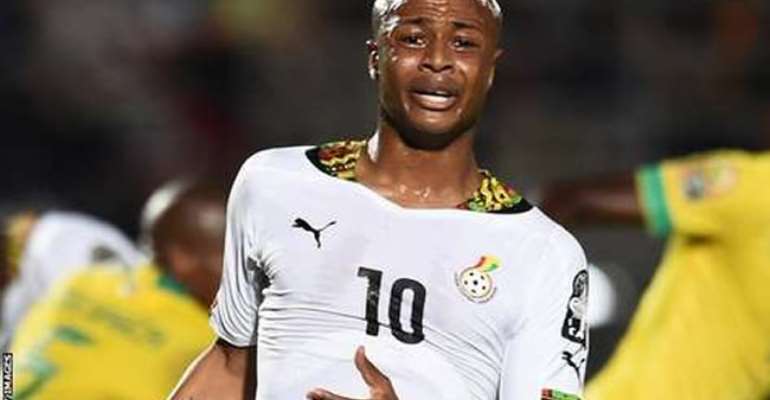 The Black Stars of Ghana exorcised a tormenting South African ghost with a late comeback win to seal qualification in the AFCON tournament currently underway in Equatorial Guinea.

Substitute John Boye cancelled a stunning Mandla Masango, volley early in the first half before Dede Ayew sealed victory with a glancing header.

The Black Stars had never beaten the South Africans in an AFCON tournament having met on three different occasions and what a way to respond. It had to take hard work and resilience though.

The Bafana Bafana needed a victory against Ghana and a favour from Senegal [who were playing Algeria in the other Group C game] to be able to qualify to the quarter final stage of the competition and when Masanga fired that cracker of a volley in the 17th minute, it looked like history was about to repeat itself.

The Kaizer Chief striker picked himself up from the ground after a little wobble before hitting a stupendous volley from 20 yards to beat Razak Braimah who was completely caught out of position.

It was a superb goal completely against the run of play as Jordan Ayew missed a sitter early on in the game. The young striker failed to capitalise on a rebound after Brilliant Khuzwayo horribly parried his feeble shot.

Christian Atsu did all the work from midfield before setting up the young striker but he fluffed his lines.

The South Africans took over after a jittery start and appeared to control the game for most part of the first half but it was Gyan who had his penalty appeal ignored after he was sandwiched and brought down by two South African defence men in the vital area.

Braimah made amends later in the 39th minute with a quick reaction to a goal bound Ndululu header.

The South Africans had gained a notorious reputation for giving away early leads in their two previous games and were cautious not to repeat same. Not against the Black Stars of Ghana. They were organised in defence and were superior in the air.

The Stars piled pressure hoping the South African defence will crumble in the second half but they always decided to float the balls high up which the Bafana Bafana handled quite well.

Gyan who was completely anonymous in the game due to the long balls nearly got the equaliser but his free kick from close range whisked just wide.

With 30 minutes left to play Avram Grant was forced to introduce John Boye after Daniel Amartey suffered an ankle injury but in a case of the rejected stone becoming the cornerstone, Boye, secured the much needed equaliser with a strike from close range.

The defender fell out with Ghanaians for scoring an own goal and for kissing the $100,000 appearance fee in the Brazil fiasco but when it mattered most in Equitorial Guinea, he kept his cool with a sublime finish from close range in the 72nd minute.

A minute later, substitute Kwasi Appiah nearly got the winner but his perfect low strike was parried away by an outstretched hand of Khuzwayo before hitting the post for a corner.

1-1 was good but not enough to see the Black Stars through because Algeria were leading Senegal by two goals to nil in the other Group C match which was being played simultaneously.

The Stars had to take their destiny into their own hands and they did in dramatic fashion.

With seven minutes left, Marseille midfielder Dede Ayew towered above his marker and superbly connected a sublime Baba Rahman cross for what would be the kick in the throat of the Bafana Bafana.

Sweet victory it was for the Stars who finished top of Group C with six points followed by Algeria with same points but inferior head-to-head record.