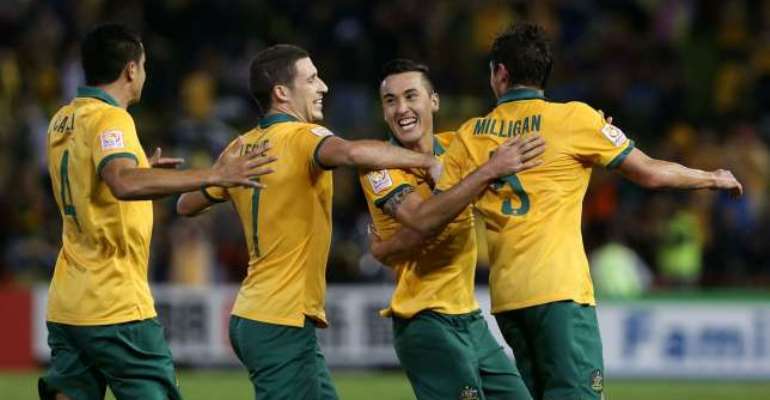 A devastating early onslaught helped Australia advance to the Asian Cup final with a 2-0 victory over the UAE at a rain-soaked Hunter Stadium.

Defenders Trent Sainsbury and Jason Davidson bagged their first international goals as the hosts scored twice in the first 14 minutes to seal their spot in Saturday's final in Sydney.

A blockbuster decider sees Ange Postecoglou's men take on South Korea, having already lost to their Group A rivals earlier in the tournament, who are yet to concede a goal in the finals.

Australia will play in their second straight Asian Cup final with a huge Sydney crowd behind them, and will expect to go one better than their loss to Japan in 2011 and land their first major piece of silverware.

Confidence will certainly be high after Tuesday's eye-catchingly professional performance to dispose of the UAE in front of more than 21,000 fans in Newcastle.

The Socceroos may have been guilty of some slow starts earlier in the tournament but they surged out of the blocks and were in front inside three minutes.

Massimo Luongo delivered a corner from the right which drifted over the heavily marked Tim Cahill for an unchallenged Sainsbury to plant home.

A feverish reaction from the stands helped wash any nerves the home side might have had away, though UAE striker Ahmed Khalil quickly tempered celebrations with a low effort which clipped the base of the post.

And the Socceroos made the most of the let-off on 14 minutes.

Ivan Franjic's cross caused havoc in the penalty area with both Cahill and Mathew Leckie denied by desperate challenges, though Luongo reacted quickest to prod the ball into Davidson's path and the left-back made no mistake from 10 yards, driving past Majed Naser at his near post.

As Postecoglou's side looked to press home their advantage, the impressive Robbie Kruse was central to their attacking play, sending a cross just over Cahill's head midway through the half before trying his luck with a shot of his own which Naser easily claimed.

Khalil fired another warning shot six minutes into the second half, rifling an effort from distance which whistled just past goalkeeper Mat Ryan's left-hand post.

Struggling for territory, Postecoglou introduced Matt McKay's fresh legs to the midfield in place of Mark Milligan, allowing Australia to regain a foothold.

Having set up Australia's two goals, Luongo went for one of his own, sending a left-footed effort curling just wide.

It mattered little though, with the hosts holding firm late on to seal a place in Saturday's showpiece, which sees them renew rivalries with a stubborn Korea side.