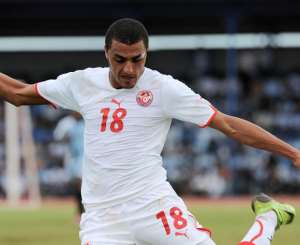 DR Congo and Tunisia both go into the quarterfinals of the 2015 Africa Nations Cup after they drew 1-1 in Bata in Group B.

Zambia and Cape Verde drew 0-0 in the other game, which sends Tunisia and DR Congo into the quarterfinals.

In a match that started with so much tension and promised to bring plenty of goals, it was not the case as there were only two goals scored in a game with plenty of opportunities.

Playing on a rainy pitch, it was Tunisia that started the match stronger but even so they could not make their early advantage count.

The first chance for Tunisia came in the 9th minute but Ferjani Sassi wasted the opportunity inside the box as Joel Kimwaki did enough to stop the danger.

Then TP Mazembe player Jean Kasusula came close to opening the scoring for Congo and gave Tunisia goalkeeper Aymen Mathlouthi his first test of the match from a set piece.

In the 31 minute Tunisia finally broke the deadlock through a header from Ahmed Akaichi who received a ball from Yassine Chikhaoui to put Tunisia ahead.

DR Congo pushed hard to equalize before the end of the first half but Tunisia's defence was too solid at the back and did not give them any chance.

In the second half Dieumerci Mbokani had a one on one with Tunisia goalkeeper Mathlouthi but failed to beat him and in the 60th minute DR Congo brought on Loteka Bokila, which made a big impact.

He came close into finding the back of the net right away when his header went over the cross bar. And then four minutes later captain Chikhaoui wasted a great opportunity to put his team into a 2-0 lead as his shot whistled over the top.

But then Bokila struck as he took his goal very well at close range following Mbokani's header in the 66th minute.

In the 74 minute Tunisia substitute Hamza Younes had a chance to score but DRC goalkeeper Kidiaba made a great save.

This match ended 1-1 and both teams qualified for the knockout stages of the Africa Cup of Nations.