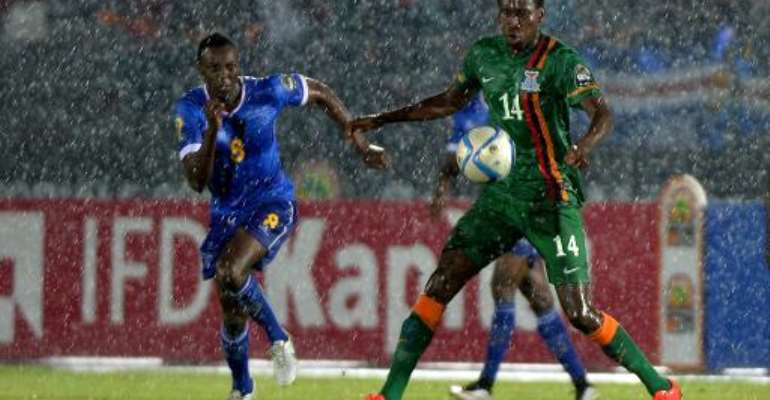 Ebebiyin (Equatorial Guinea) (AFP) - Cape Verde and Zambia were eliminated from the Africa Cup of Nations in Equatorial Guinea on Monday after a dour 0-0 draw in a match hit by a tropical storm.

Tunisia won Group B and the Democratic Republic of Congo came second after they drew 1-1 in port city Bata at the same time.

Cape Verde finished level on points and goal difference with DR Congo, but lost out because they scored only one goal in three matches while the Congolese managed two.

Torrential rain, thunder, lightning and a swirling wind made good football impossible and when Zambia got a stoppage-time chance to snatch victory and a last-eight place, Mukuka Mulenga shot wide.

It was the second consecutive first-round exit for the Zambian Chipolopolo (Copper Bullets) after lifting the trophy in 2012 against all the odds.

Elimination proved a bitter blow for the Cape Verde Blue Sharks, who reached the quarter-finals in their Cup of Nations debut two years ago.

A scrappy first half ended goalless with neither team creating a clear-cut scoring chance at Estadio de Ebebiyin in the north-east corner of Equatorial Guinea.

Zambia had an opportunity to trouble Cape Verde just past the half hour after Carlitos was yellow-carded for fouling Evans Kangwa just outside the penalty area.

But in keeping with the generally uninspiring standard of football, Lubambo Musonda struck the free-kick straight at the defensive wall.

Rodrigues, getting his first start of the tournament for Cape Verde, was involved in two close shaves for Zambia just before half-time.

His free-kick found Toni, who should have done better than heading over from point-blank range on 44 minutes.

And in the second minute of stoppage time, a Rodrigues free-kick flew low across the goalmouth and just wide of the far post.

Conditions deteriorated considerably during the break and the second half began with puddles dotting a pitch created only this month with grass imported from Spain.

Fortunately, by the time the game reached the hour mark, the rain eased, but the match had become a lottery with water spraying each time there was a tussle for possession.

Cape Verde substitute Djaniny got a sight of goal just inside the box midway through the half, but slipped on the treacherous surface and the ball was cleared.

Zambia had a good chance to end the stalemate 12 minutes from time only for substitute Patrick Ngoma and Kangwa to miss a low Chisamba Lungu cross.