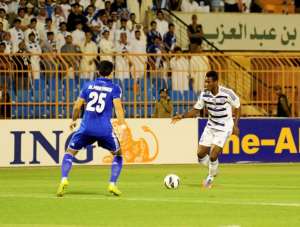 By Rahman Osman
Follow on twitter @iamrahmanosman
Ghana skipper Asamoah Gyan, says Bafana Bafana  will be treated as enemies on the field of play ahead of their all-important group game on Tuesday.

The Black Stars will seal qualification to the quarter finals of the ongoing Africa cup of nations in Equatorial Guinea if they beat South Africa on Tuesday.

Shakes Mashaba's side have looked good from open play but have lacked cutting edge, culminating in them picking up just a point from two games and steering at an early exit from the competition.

The Black Stars have however shaken off their disappointing performance against Senegal to post an impressive 1-0 win against pre-tournament favorites Algeria.

Gyan the hero of the day against Algeria says the Rainbow nation will be treated as enemies on Tuesday.

“I am sorry to tell them that we will be enemies on the field of play,” Gyan said

“South Africa is a good side with young and promising players but I am Ghanaian and we have to qualify.”

This AFCON Update on Ghanasoccernet.com is brought to you by Unibank caring for you