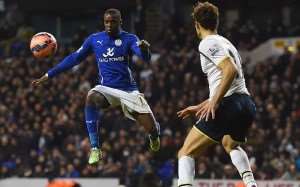 Between the waves of  Leicester City  euphoria at Jeffrey Schlupp's winner, there was one uncomfortable question.

How could a player withdrawn this month on injury grounds from Ghana's squad for the Africa Cup of Nations miraculously recover to score the most memorable goal of his club's campaign?

It was not as if Schlupp had come on for a mere cameo role in Leicester's triumph. Indeed, he was by some distance their most creative player: the provider for Leonardo Ulloa's equaliser, and the finisher when it came to the glorious injury-time flourish.

But 3,500 miles away in Equatorial Guinea, the winger's team-mates for Ghana, whose win over Algeria has carried them to the cusp of the Cup of Nations quarter-finals, could be forgiven for asking why he was at White Hart Lane at all.

Schlupp, originally selected for the tournament in west Africa, was pulled out on the advice of Leicester's doctors, who cited a knee injury. This was in scant evidence, though, during his dynamic display to help vanquish  Tottenham Hotspur .

Avram Grant, Ghana's head coach, is understood to be so infuriated by Schlupp's absence that he is considering making an official complaint to Fifa.

But Leicester manager Nigel Pearson disclosed that the club had yet to receive any contact from the Ghana federation.

“We have been totally transparent about the situation,” Pearson said.

“Jeffrey did not take part in Ghana's training camp and was advised not to fly. Ghana had an independent medical assessment done and came to the same conclusion.

“I know this has got legs, because he has scored the winner. There will probably be more about it, but I am not concerned by any negativity. I am just delighted that he is with us and that he has shown what a talent he is.”

Pearson was well-advised to savour Schlupp's coup de grace, which brought only Leicester's second advance in a decade to the FA Cup's last 16, because for 83 minutes it had looked remote to the point of dreams.

Much of that time had been spent seething over a glaring error by the 29-year-old referee Robert Madley, who booked debutant Andrej Kramaric for diving instead of awarding a penalty against Tottenham goalkeeper Michel Vorm for an obvious trip.

Thus, the manner in which the decisive goal was delivered, Schlupp's shot wriggling through the hands of the despairing Vorm, perhaps restored some semblance of justice.