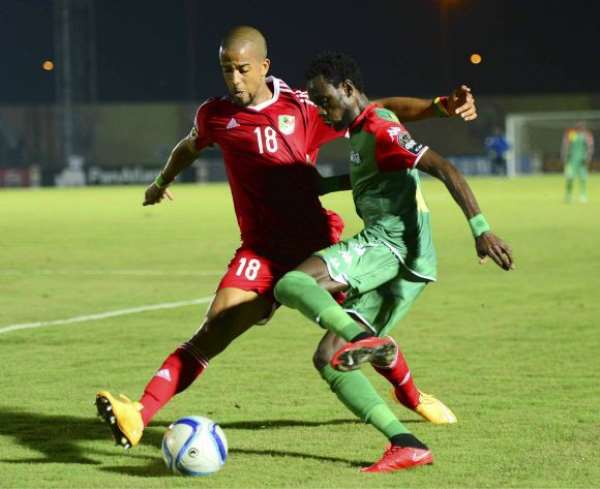 2013 African Cup of Nations runners-up Burkina Faso crashed out of the 2015 Afcon following a 2-1 loss to Congo at the Nuevo Estadio de Ebebiyín.

Having ended their 41 year wait for a win at an Afcon tournament, the Red Devils only had to wait four day four days for their next one as a second-half goals from Thievy Bifouma and Fabrice Ondama secured a hard fought win for Claude Le Roy's men.

Congo progress as Group A winners alongside hosts Equatorial Guinea who beat Gabon 2-0.

The opening stanza got off to a slow start with the Stallions bossing possession knowing they need nothing else than all three points to progress to the knockout stages.

Having been the top scorer in qualifying much was again expected of Jonathan Pitroipa who led the Burkinabe to the final two years ago, but the striker had a disappointing tournament.

The Al-Jazira forward was caught offside no fewer than five times in the opening half-hour as he continued to struggle in front of goal.

Following what was a frustrating half for both sides, the game came to light six minutes into the second stanza as Bifouma bagged his second goal of the tournament.

Fode Dore broke down the right flank before lying it on a plate for the Almeria forward who made no mistake from close range.

Knowing his side had to win to progress Paul Put introduced Bertrand Traore and Aristide Bance just before the hour mark.

The duo had an immediate impact with Traore going close before Bance found the back of the net in the 86th minute. The imposing marksman finishing off Issaka Ouedraogo's pin-point cross to set up a tense finale.

Congo though would retake the lead two minutes later thanks to a goalkeeping blunder from Germain Sanou who's attempted clearance bounced off a grateful Ondama as the 1972 champions secured progression to the quarter-finals.